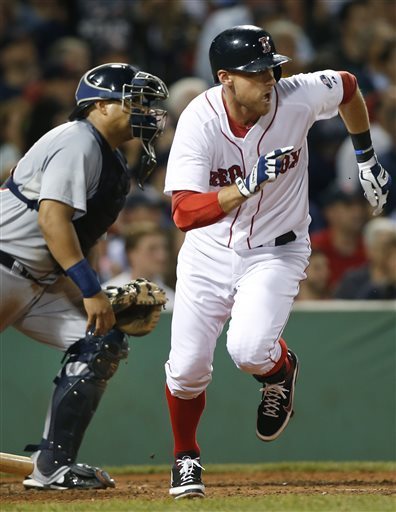 RED SOX- After another hard luck John Lackey loss on Labor Day [i.e. where he pitched reasonably well, but the Red Sox were shut out- NANESB!], the Red Sox had the even more formidable task of trying to figure out a way past Detroit's Max Scherzer for Tuesday night's game.

The difficulty of this endeavor was compounded when the Tigers got out to an early 1-0 lead thanks to a Jose Iglesias RBI double against his former team in the top of the second, although Brayan Peña made an ill-advised decision to try and come home and was thrown out by a relay that arrived at the dish 6 or 7 paces ahead of him.

Although Boston starter Jon Lester wasn't working as efficiently as Scherzer, he was still pretty effective- limiting Detroit to just the one run over seven innings of work. In the bottom of the fifth, Jonny Gomes hit a 1-out single followed by a Stephen Drew ground-rule double to deep right center [that actually took a run off the board for the Red Sox at the time- NANESB!]. David Ross then struck out swinging and it was up to Will Middlebrooks to bring the runners home with two away in the bottom of the 5th, which he did with a 2-RBI single to center field before Victorino struck out to end the inning.

Lester would end up striking out nine before leaving the game in the 7th inning and turning the game over to the bullpen. Workman, Breslow and Tazawa would hold the Tigers scoreless and Koji Uehara would get all three batters he faced in the 9th out [including striking out Peña and Iglesias to end the ballgame.

Wednesday night's series finale will feature Ryan Dempster [7-9; 4.75 ERA] going up against Rick Porcello [11-7; 4.44 ERA]. First pitch is scheduled for 7:10 ET and the game will be televised locally on NESN and nationally on ESPN.

OTHER RED SOX NEWS- Red Sox announcer and former second baseman Jerry Remy announced that he will not return to the broadcast booth for the remainder of the 2013 season. Remy has been absent since August 15th, the night his son Jared Remy allegedly murdered his girlfriend, Jennifer Martel.

The 34 year old son of the former Red Sox second baseman, a bodybuilder with a lengthy domestic violence rap sheet is accused of stabbing Martel to death on the patio of their home.

EVEN MORE RED SOX NEWS- Clay Buchholz threw 3⅓ innings for the Paw Sox at McCoy stadium over the weekend in what's supposed to be his second of three rehab starts. Buccholz allowed one earned run and struck out two after throwing 53 pitches against the Syracuse Chiefs on Aug 31st.

Assuming Buchholz makes his third rehab start with Pawtucket, it will most likely be on the road in the International League playoffs against the Rochester Red Wings starting this week.

PITTSBURGH PIRATES- The Pittsburgh Pirates acquired former Twins first baseman Justin Morneau via a waiver trade over the weekend. The Bucs will send outfielder Alex Presley to the Twin Cities in exchange for the 4-time all star.

Although Morneau had reportedly been battling concussion-like symptoms, he's been hitting .259 with 17 home runs and 74 RBI in 2013- 10 of those homers coming after the All Star break this season.

The Morneau trade comes just days after the Pirates acquired Marlon Byrd from the New York Mets. Byrd- who's also done time with the Red Sox, Nationals, Phillies, Rangers and Cubs- was batting .285 with 21 homers and 71 RBI for the Mets this season. Ironically, the Mets dealt Byrd on what was scheduled to be Marlon Byrd T-shirt night at Citi Field.

The Pirates currently lead a very tight NL Central pennant race by a game and a half while Cincinnati and St Louis are going head to head this week. The Pirates are in search of their first winning season and playoff berth in 21 years.

NCAA FOOTBALL- As it turned out, Wofford's road victory over UConn was just the beginning.

For opening weekend, more than a half dozen NCAA FCS [formerly division I-AA- NANESB!] teams left the home crowds in stunned silence as they would go on to beat their hosts.

Defending FCS champion North Dakota State opened up their season against the Kansas State Wildcats in Bill Snyder Family Stadium in Manhattan, KS, defeating the defending Big 12 champions by a 24-21 final on Saturday.

Perhaps the biggest upset of the entire weekend was Eastern Washington's 49-46 win over #25 Oregon State at Corvallis- the first time a FCS/Division I-AA school beat a ranked FBS opponent since Appalachian State upended #5 Michigan by a 34-32 final in the Big House for the opening game of the 2007 season.

Other victories included McNeese State trouncing South Florida by a 53-21 final, Northern Iowa getting past Iowa State by a 28-20 final, the Eastern Illinois Panthers thumping the San Diego State Aztecs 40-19, Samford getting by Georgia State 31-21 and Southern Utah beating South Alabama 22-21 [although Georgia State and South Alabama are making their respective Sun Belt conference debuts and not that far removed from the FCS themselves- NANESB!].

With more than 30 FCS teams scheduled to take on FBS opponents this weekend- including #7 Texas A&M, #4 Clemson and #8 Louisville- we'll see if this opening weekend was an aberration or a sign of things to come.

TEXAS A&M- Heisman-trophy winning QB Johnny Manziel was suspended for the first half of Saturday's season opener against the Rice Owls. Manziel reportedly violated NCAA rules after reports circulated he was receiving monetary compensation for signing autographs. Instead, Manziel was found in breach of a minor NCAA bylaw and given a lighter suspension.

Hardly coming across as repentant or apologetic, Manziel instead spent the second half of Saturday's 52-31 win over the Owls by taunting players with money-counting or autograph signing gestures after completing big plays.

BOSTON COLLEGE- The Eagles are already halfway towards their 2012 win total after taking the home opener against Villanova on Saturday. Boston College trailed 14-7 in the first quarter, but would go on to score 17 unanswered points against the Villanova Wildcats [which some polls have as ranked 9th in the FCS- NANESB!] of the FCS Colonial Athletic Association in the second half. QB Chase Rettig tied the contest up on a 50 yard catch and carry to WR Alex Amidon for a TD on the opening drive of the 3rd quarter before RB Andre Williams gave Boston College their first lead of the day with a 26 yard TD run to make it 21-14 Boston College.

The Eagles would get some insurance with a Nate Freese 39 yard FG to make it 24-14 late in the 3rd, and that would be the final as the Eagles win in their season opener.

The Eagles will host their first ACC opponent of the season on Friday night when the 1-0 Wake Forest Demon Deacons head to Chestnut Hill. The game kicks off at 8:00 ET and will be televised on ESPN2.

UMASS- While there were a number of massive upsets in the works, UMass beating #23 Wisconsin wasn't one of them as the Badgers shut out the Minutemen by a 45-0 final. Even though UMass made the transition to FBS last season, Saturdays game still had the air of a hapless FCS/Division I-AA opponent being served up to a vastly superior opponent...which is kind of reflected in Saturday's final.

This weekend, the Minutemen will host former Colonial rival Maine in the UMass 'home' opener. The Black Bears are coming off a 23-6 win against Norfolk State to open their season.

NFL- Are you ready for some Football? Now that the games will actually count, I think I am.

The regular season kicks off Thursday night with the Broncos hosting defending Super Bowl champion Baltimore in Denver. The game will be televised on NBC and kickoff is scheduled for 8:30 ET.

NEW ENGLAND PATRIOTS- The Patriots wrapped up their preseason with a 28-20 win over the New York Giants. Brady had the night off, so the QB duties were split between Mallet and Tebow. Mallet went 10-16 with 116 yards, a sack, a TD and an interception while Tebow went 6-11 with 91 yards, two TDs, four sacks and an interception.

However, Tebow was saving his best for last, with a 9 yard TD pass to WR Quentin Sims with 6 seconds remaining in the 4th quarter to give the Patriots a 28-20 lead.

As it turned out, this would be Tebow's final play as a Patriot, with the team cutting the former Broncos and Gators QB on Saturday. Coach Belichick was non-committal when asked about the possibility of the quarterback returning to the Patriots roster later on this season.

The Patriots will open the regular season on the road in Buffalo this Sunday with a 1:00 ET kickoff. The game will also be televised on CBS.
Posted by Fenway_Nation at 3:56 PM