From Thursday night's Bronco's blowout of the defending Super Bowl champion Ravens to Monday night's [technically Tuesday morning's- NANESB!] stunner in San Diego where the Texas bested the Chargers 31-28 as time expired, it's good to see that football is back at long last. 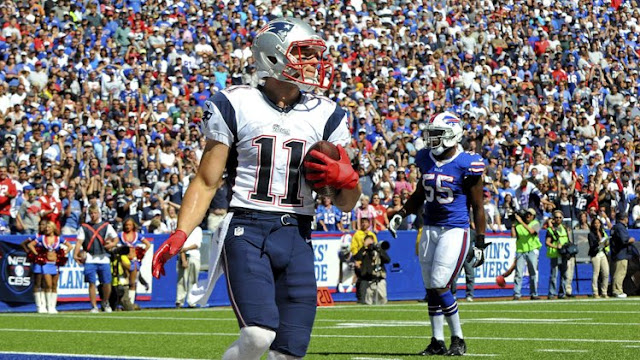 Although New England had to punt on their first possession of the game, they'd get the ball back when DT Tommy Kelly recovered a CJ Spiller fumble at the Buffalo 11 yard line and Brady would connect on 3rd and goal to give the Patriots an early 7-0 lead.

On their next possession, the Patriots started out with great field position thanks to a 15 yard penalty on Buffalo's punt coverage tacked onto a 16 yard return by Edelman, giving New England the ball at mid-field to start off with. However, the Patriot's drive would sputter once inside the Bill's 30 yard line and New England would have to settle for a 48-yard Gostkowski FG to put them up 10-0.

Buffalo's defense would get the Bills back in the game in the 2nd quarter when safety D'Norris Searcy recovered a fumble from Stevan Ridley inside the Bills 30 and returned it 74 yards for paydirt, making it a 10-7 game.

With less than 4 minutes to go before halftime, Pats DE Rob Ninkovich recovered a Marquise Grissom fumble on the Bill's own 35 yard line, giving Brady a short field to work with. On the first play of the drive, RB Shane Vereen went 21 yards before Brady once again connected with Edelman to make it a 17-7 game.

However, with 1:03 remaining in the half and the Patriots getting the ball back on their own 25, Bills CB Justin Rogers picked off Brady at the Pats 37 yard line, giving EJ Manuel a short field to work with. It took all of two plays for the Bills to hit paydirt, with Manuel hooking up with WR Robert Woods to make it a 17-14 game.

Buffalo would then take the lead on their opening possession of the second half, with CJ Spiller and Fred Jackson getting most of the work done on the ground after the Bills started out on their own 20. The drive was capped with an 18 yard TD pass from Manuel to WR Stevie Johnson to put Buffalo up 21-17 for their first lead of the day.

Although the Buffalo was able to keep Brady out of the end zone on their first possession of the 4th quarter, a 33 yard Gostkowski FG made it a one point game with Buffalo still on top 21-20.

After Buffalo went three and out on an offensive series where they just needed a few first downs and keep the clock moving, New England would get the ball back with just over four and a half minutes remaining. Brady would move the Pats down the field thanks mostly to short passes to Vereen and Danny Amendola that would drive New England down inside Buffalo's red zone with less than a minute remaining. With less than a minute to go in regulation, New England was content to just run down the clock before Gostkowski kicked a 33 yard FG to put the Patriots up with 5 seconds remaining in the game.

Nothing would come of Buffalo's next possession after the kickoff and the Patriots would go on to win by the final of 23-21. Tom Brady would go 29 of 52 with 288 yards, 2 TDs and an interception while Buffalo's EJ Manuel went 18 of 27 with 150 yards and two TDs. Julian Edelman was the recipient of both of Brady's TD passes and had 79 yards on the day.

The Patriots have a pretty quick turnaround this week with their next game on Thursday night against the Jets, which will be the New England home opener. The Pats may have to do it without Vereen and Amendola, though.

The Jets themselves are coming off a win decided by a FG in the waning seconds of the game against Tampa Bay. Kickoff is scheduled for 8:25 ET and the game will be televised on the NFL network. 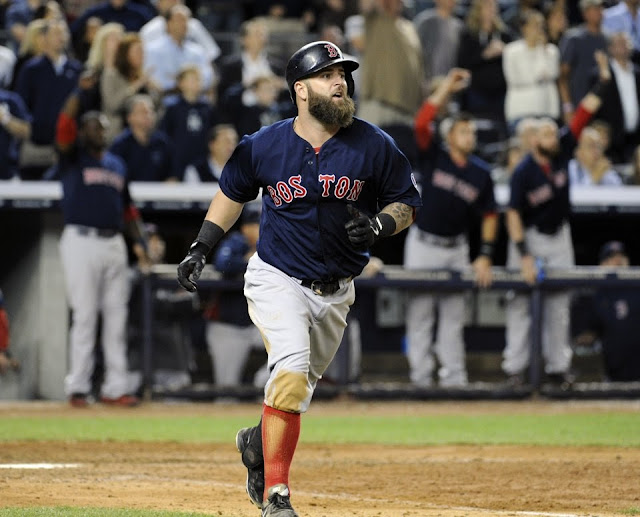 RED SOX- Since Wednesday night, the Red Sox have scored a grand total of 57 runs- with 37 of those runs being scored against the Yankees.

Throughout late last week and the weekend, the Red Sox bats feasted on Yankees pitching including an improbable 5-run rally in the top of the 7th after trailing 8-3, followed by a 4-run top of the 8th to put them up 12-8 on Friday night. Although the Red Sox would end up losing Sunday afternoon's contest by a 4-3 final, the Red Sox would take three out of four from the Yankees over this weekend's four game series. The skid puts the Yankees three games behind Tampa Bay the final Wild Card berth in the AL. Baltimore and Cleveland also leapfrogged past the Yankees with the Yankees loss to the Orioles on Monday night.

Interestingly, since all but two of Boston's remaining games will be against AL East opponents, this means that the Yankees, Orioles or Rays will need an assist from the Red Sox if they want to clinch one of the remaining Wild Card berths [It's a tight race between the Rangers and A's in the AL West, so it's likely that the runner-up in that division will get the other Wild Card berth- NANESB!]. In other words, Rays, O's and yes...even Yankees fans...will likely be rooting for the Red Sox at some point between now and the end of the regular season. 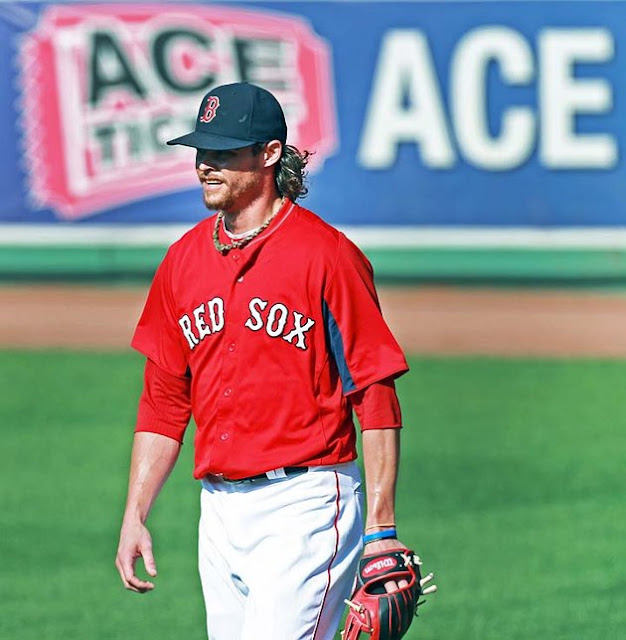 As much as I love the Red Sox taking three out of four from the Yankees when the Bronx Bombers are in dire need of W's, this weekend series in the Bronx was almost an afterthought.

The big news in Red Sox nation isn't the fireworks display from the Red Sox bats last wee, but the return of Clay Buchholz to the mount for the first time since June. In August, Buchholz appeared in rehab starts for both the Single-A Lowell Spinners of the New York-Penn league and AAA Pawtucket Red Sox. In his most recent start, Buchholz was limited to around 75 pitches and gave up 4 hits and 2 earned runs while walking two and striking out five in 3⅔ innings against the Rochester Red Wings in the first round of the International League playoffs. The start with the Paw Sox was actually pushed back a day so that Buccholz could be with his wife when she gave birth to the couple's second daughter last week.

After his rehab start in Pawtucket, Buchholz travelled with the team to Yankee stadium and threw a bullpen session over the weekend- reportedly the final step prior to his returning to the lineup.

For Tuesday night, the Red Sox will travel to Tampa's Tropicana  Field to take on the Rays. Clay Buchholz [9-0; 1.71 ERA] will be tested against David Price [8-7; 3.51 ERA] on Tuesday night. First pitch is scheduled for 7:10 ET and the game will be televised on NESN as well as the MLB network in some markets.

OTHER RED SOX NEWS- Outfielder Jacoby Ellsbury is sidelined with a compression fracture right foot after undergoing an MRI and returning to Boston over the weekend. Both his agent and Red Sox manager John Farrell said it was likely that he could return by the end of the regular season.

Ellsbury has been batting .299 with 8 homers and 52 RBI. He also leads the majors in stolen bases this season with 52, only getting thrown out four times. The All-Star center fielder becomes a free agent at the end of the season as well.

OTHER MLB NEWS- The Pittsburgh Pirates have clinched their first winning season in 21 years after coming out on top in a pitcher's duel in the Lone Star state. Gerrit Cole bested Rangers starter Yu Darvish and threw 7 shutout innings against Texas while Pedro Alvarez brought ex-Rangers outfielder Marlon Byrd home for the game's only RBI.

Currently the Pirates are one game behind the St Louis Cardinals in the NL Central pennant race and one game ahead of the Cincinnati Reds in the Wild Card chase- although it appears likely that the two NL Wild Card berths will come from the NL Central.

PAWTUCKET RED SOX- With a little help from none other than Clay Buchholz, the Paw Sox managed to best the Rochester Red Wings in the first round of the International League playoffs. The defending International League champions will next take on the Durham Bulls at the Bulls Athletic Park in Durham, NC at 7:05 ET. 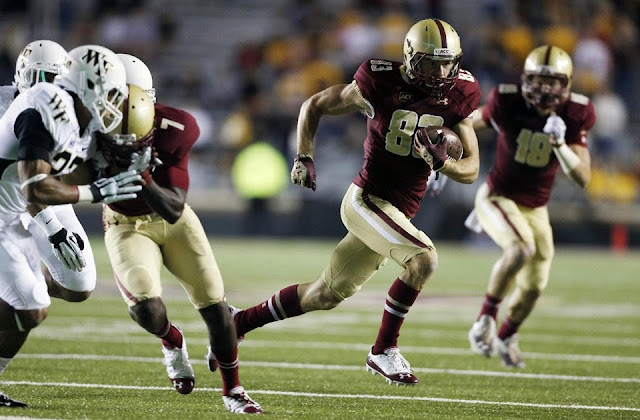 NCAA FOOTBALL- Only the second week into the regular season and the Boston College Eagles have already matched their win total from 2012. Not only that, the Eagles managed to match their conference win total on Friday night when they played their first ACC match of the season against Wake Forest.

BC got out the the early lead after Eagles DB Spencer Rositano recovered a Deacons fumble at the Wake Forest 30 yard line on Wake's opening possession of the game. Eagles QB Rettig then made a quick strike to WR Alex Amidon on a 26 yard catch and carry to hit paydirt and go up 7-0 just 40 seconds into the game.

Trailing 17-7 late in the second, Wake had a golden opportunity to get back in the game when a Nate Freese punt was blocked at the Eagles 28 yard line and recovered by Wake at the Eagles 3 yard line. Wake would try and punch it in with 50 seconds remaining, but would be denied on 4th and goal with only 10 seconds to go in the half.

The Eagles would pad their lead in the second half thanks to a TD pass from Rettig to WR Spiffy Evans and an Andre Williams rushing TD and go on to win by a 24-10 final.

The next couple of weeks look somewhat difficult for Boston College as they travel to the west coast to take on the USC Trojans before hosting the #10 Florida State Seminoles on Chestnut Hill on September 28th.

UMASS MINUTEMEN- While the Eagles improved to 2-0 on the season, an FCS school and one-time Minuteman rival bested UMass in Gillette Stadium over the weekend.

The Maine Black Bears trailed early, but would score 21 points to surge past UMass and win by a final of 24-14, giving them a 2-0 record for a share of first place in the Colonial conference- the Minutemen's former conference before jumping up to the FBC and MAC.

The Minutemen will travel to Manhattan, KS next week to take on Kansas State [interesting side note- Kansas State has already lost to defending FCS champion North Dakota State in their season opener- NANESB!]. However, Kansas State won last weekend's contest against Louisiana-Lafayette by a 48-27 final. 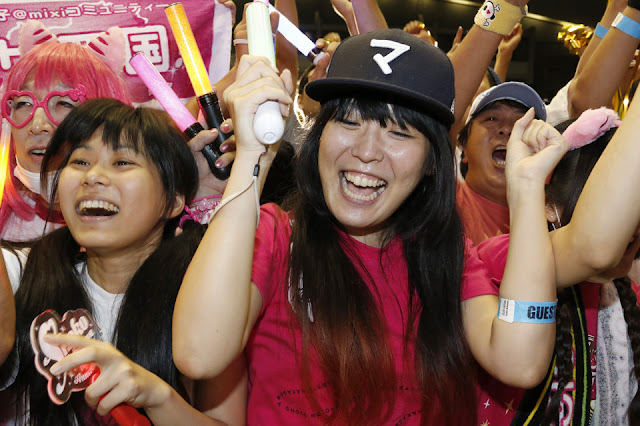 OLYMPICS- The International Olympic Committee named the host city for the 2020 summer Olympiad with Tokyo garnering more votes than Istanbul. This would be the fourth time that Tokyo has hosted the Olympics and the fourth time overall that Japan has hosted the Olympics. Tokyo hosted the 1964 Summer Games and the mountainous cities of Sapporo and Nagano played host to the winter games- in 1972 and 1998, respectively.

Despite choosing venues such as Sochi, Russia or Rio de Janerio, Brazil, considered potentially risky by some, observers say the IOC opted to play it 'safe' with the Tokyo selection and go with a city that has already hosted the games once and should have little problems accommodating another summer Olympiad.

In 2011, the IOC announced that the mountainous South Korean municipality of Pyongchang would be hosting the 2018 Winter Olympics.
Posted by Fenway_Nation at 3:59 PM