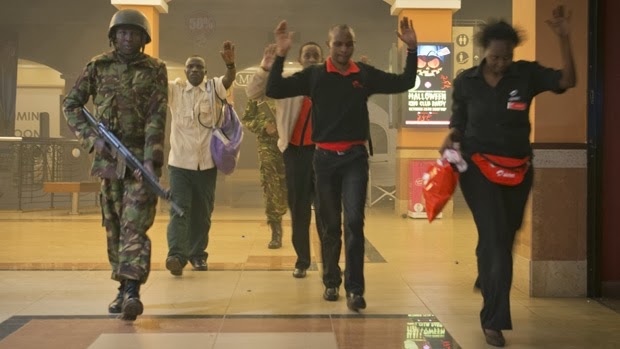 Officials in the Kenyan capital of Nairobi are reporting that at least 39 people have been killed in a gun and grenade attack on an upscale shopping mall that was popular with expats, well-heeled Kenyans and diplomats.


At least 39 people have been killed and more than 150 injured in the attacks, Kenyan President Uhuru Kenyatta said in a televised address late Saturday. Wearing a casual plaid shirt, Mr. Kenyatta offered his condolences to those who lost loved ones—and included himself in that group.

"I know what you feel having also personally lost very close family members in this attack," Mr. Kenyatta said, without elaborating further. He called the strike a terrorist attack and urged Kenyans not to give in to fear.

The death toll is expected to rise as police make their way through the large complex, which has three main floors and a smaller fourth floor housing a movie theater, to confront the assailants, who they believe are holding hostages.

The Kenyan government's National Disaster Operation Center said that Kenyan military and special forces had taken control of the upper floors of the mall but that lower floors were still unsecured.

It wasn't clear how many people were still trapped inside.

Patrons of the mall were sitting down for lunch or strolling through the facility when cars packed with an unknown number of gunmen drove up to the main entrance of the mall around 12:30 p.m. and started shooting as they rushed through the open doors where guests usually wait in line to have their bags checked by security guards, witnesses said.

The attackers shot into the crowds of people at outdoor restaurants and pushed farther into the mall, firing their weapons and throwing grenades as they raced to the higher levels of the mall. Shoppers crawled into back storerooms and bathrooms, locking doors where they could. At least one bank was able to lock its customers in a safe room, witnesses said. Those near exits raced out of the mall, some taking refuge in nearby apartment buildings to catch their breath and call family members.

Police arrived and cordoned off the parking lot, at first believing they were dealing with a robbery attempt. But as wounded survivors started piling into ambulances it became clear that the attackers had opened fire, that they hadn't appeared to be after anything and that they seemed to be targeting non-Muslims.

Police and military forces slowly started the work of pushing into the mall and pulling out those hiding and the injured while trying to close in on the attackers without knowing exactly how many assailants there were or where they were shooting from.

As survivors emerged, some with their hands up to show they weren't carrying weapons, Red Cross workers escorted them to a nearby building and assured them they were safe.

Canada's Ministry of foreign affairs has confirmed that at least two citizens, including a diplomat from the embassy, were among those killed in Saturday's terrorist attack. Reports were also circulating that four American nationals were injured in Saturday's attack. The death toll is expected to increase amid reports that the attackers took a number of hostages as they moved through the mall. 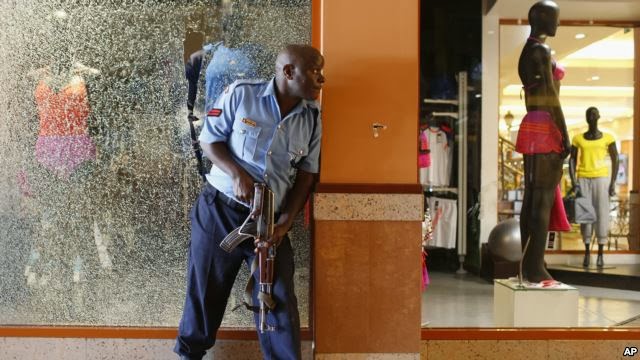 Police had initially believed the gunfire was from armed robbers until survivors emerged from the mall and told police and reporters how the assailants were firing indiscriminately, lobbing grenades and singling out non-Muslims for execution. By early Sunday, there were conflicting reports that the police had one of the wounded attackers in custody and the rest were barricaded inside a Nakumatt supermarket within the mall.

The Somalia-based Al Qaeda affiliated terrorist group Al Shabaab claimed responsibility for the attacks and said that there would be no negotiations between the hostage takers and Kenyan security forces. In recent years, Al Shabaab has attacked Somalia's UN-backed interim government, engaged in piracy and kidnapped foreign nationals for ransom. The terrorist group has threatened both Kenya and Uganda for sending troops to Somalia in support of the interim government as part of an African Union peacekeeping force.

Sunday's shooting would be the deadliest terror attack in Kenya since the summer of 1998 when Al Qaeda launched simultaneous attacks targeting the US Embassies in Nairobi and Dar Es Salaam, Tanzania.

In 2010, Al Shabaab claimed responsibility for a suicide bombing in Kampala, Uganda that killed more than 70 people and coincided with the finale of the 2010 World Cup. In 2012, a combined Somali and Kenyan military force launched raids into Somali territory targeting Al Shabaab-held towns and encampments.

UPDATE- 9/22: Officials have revised the death toll to 59 while the total injured is said to be 175. Kenya's NTV reports that there are still anywhere from 10 to 15 attackers barricaded in the market.
Posted by Fenway_Nation at 10:57 PM