Today's Train of Thought- Having a Ballast, September 15th, 2013 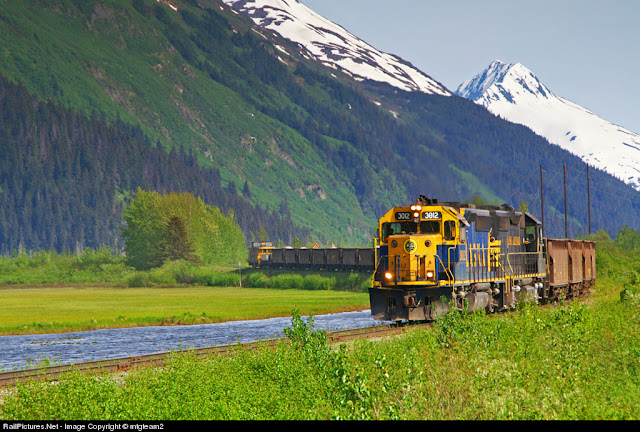 Today's Train of Thought takes us to the Final Frontier where the days are longer and the conditions are much harsher than the rest of the country.

Summer doesn't last very long up in Alaska, and the state's largest railroad needs to make the most of the warm weather to get things done. It's during this time of year that the railroad often hires seasonal workers such as ticket clerks, conductors, mechanics, on-board guides, engineers, carmen and track workers. Not surprisingly, this is also the busiest time of year on the ARR. In addition to freight to and from the Lower 48, the ARR also hauls a number of passenger trains carrying cruise ship passengers disembarking in Anchorage to Seward, Denali National Park or Fairbanks.

The warm weather months are also ideal for carrying out heavy maintenance on the ARR right of way since the ballast, gravel and rip rap needed for such projects can be excavated fairly easily. Here, railpictures.net contributor Frank Keller caught Alaska Railroad GP40-2 #3102 snaking its way past Turnigan Arm between Fairbanks and Portage, AK with a ballast train in tow in June 2009. The ballast trains are reportedly one of the few trains on the ARR that still regularly draws a caboose. Riding a few cars ahead of the caboose [look for the little dots with safety vests on- NANESB!] are some crew members who will likely get off a few miles up the line when the train stops to dump some of the ballast.
Posted by Fenway_Nation at 11:03 PM