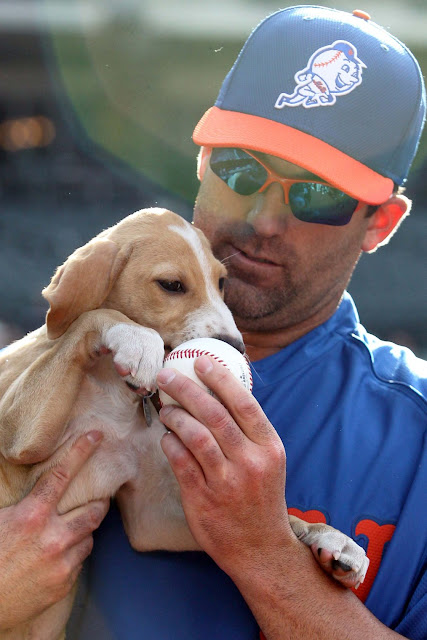 An embarrassed New York Mets GM Sandy Alderson was left at a loss to explain to the sports media his struggling club's recent loss to a disorganized gaggle of puppies who were part of a pregame ceremony encouraging fans to adopt from the North Shore Animal League.

The pups were brought out onto the field in an enclosed pen where Mets relief pitchers Tom Byrdak and LaTroy Hawkins posed for pictures with the playful canines and volunteers from the animal shelter.

However, the playful little doggies were all business once it was time for the first pitch, scoring 10 unanswered runs off of the Mets bullpen in the top of the 7th inning. Previously, the Mets had been nursing a 1-0 lead on an Eric Young RBI double off the little border collie puppy that liked to roll around on the dirt in the pitcher's mound.

Met's starter Jonathon Niese was on track for the win until the 7th inning implosion and could only shake his head while watching the 3-week old puppies run roughshod over his team from the Mets dugout. His postgame comments were limited to a few terse words on how the puppies showed up to play and found a way to win.

Alderson had expressed hopes in comments to New York Post that his team would be better prepared for next week's home finale, which will be against the kittens from the Smithtown, NY-based Long Island Feline Adoption Center.
Posted by Fenway_Nation at 5:06 PM