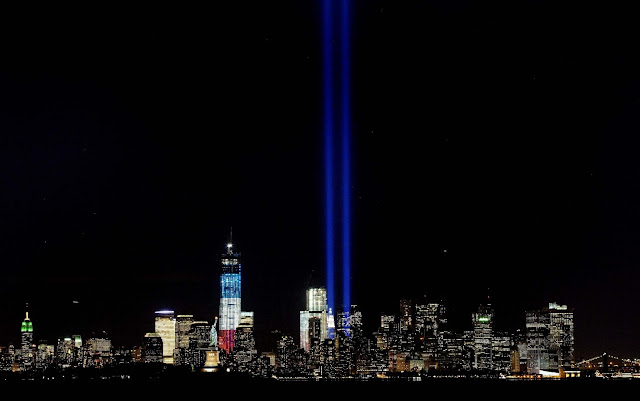 
What began as a temporary visual arts program a few months after the deadly terrorist attacks in lower Manhattan has evolved into an annual tradition that makes its mark on the Gotham skyline each year in early September.

Beginning in March 2002, the New York Municipal Art Society uses a total of 88 powerful searchlights pointed skyward placed adjacent to the World Trade Center site- even in the bright lights of New York City, the Tribute in Light manages to stand out. The lights are visible from Staten Island and across the Hudson River in New Jersey.

Interestingly, the Tribute in Light was supposed to be a temporary project with each year supposedly being it's last. However, the Municipal Art Society has been invited back to erect the searchlights each year- although with work on the new World Trade Center buildings progressing, it's entirely likely that the Tribute in Light will be crowded out by the newer structures and September 11th Memorial over the next few years.

Posted by Fenway_Nation at 1:41 AM