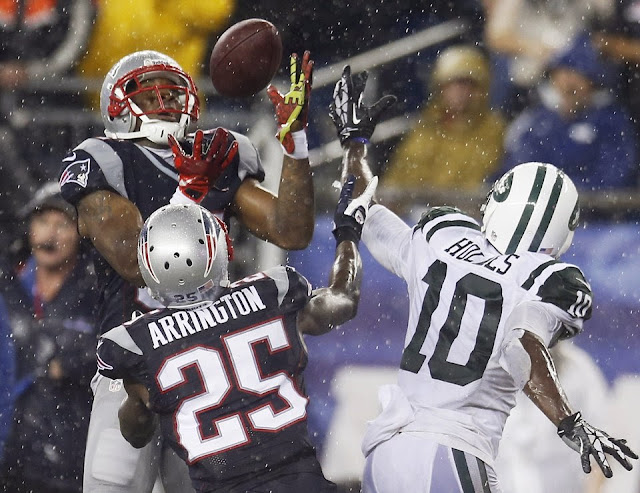 It was a pretty quick turnaround for week two in the NFL, which for the Patriots and Jets started on Thursday night at Foxbourough. Between the short rest and loss of WR Danny Amendola and RB Shane Vereen, things weren't looking so good for the Patriots.

Early on it looked as though the Pats would have little trouble scoring as Brady led a drive downfield on the first possession of the game, throwing to WR Aaron Dobson for his first NFL touchdown- a 39 yard reception from Brady- at exactly three minutes into the game to put New England on top 7-0.

New England looked as though they'd blow this one open when FS Devin McCourty recovered a Stephen Hill fumble at mid field and returned it all the way to the Jets 8. However, New York's offense came up with a big stop on 3rd and goal from their own three, forcing New England to settle for 3 points, making it 10-0 New England.

The Jets got on the board with their next possession, although they had to settle for a 37 yard Nick Folk FG after the drive sputtered deep in the Patriots red zone. With just over five minutes to go in the first half, Stephen Gostkowski made it a 10 point game thanks to a 30 yard FG, giving New England 13-3.

In the second half, both the weather and the play got sloppier. Jets starting QB Geno Smith led New York on a sustained drive down the field on their second possession of the 3rd quarter and hit paydirt when Bilial Powell punched in a 3 yard TD carry to pull the Jets within three.

Then- nothing happened. I don't mean literally nothing, but whenever the Patriots had the ball in the fourth quarter, New England would go 3 and out while it seemed as though whenever the Jets had the ball, QB Geno Smith would throw a pick [not a pick-6, unfortunately- NANESB!]. The game was sealed for New England when Pats CB Aqib Talib picked off a Smith pass on the Jets 43 with 38 seconds to go in the 4th quarter and went out of bounds. There was some extracurricular roughhousing that drew some penalties against the Jets, but when play resumed Brady was able to take a knee and mercifully run out the clock on this one.

As far as victories go, this one doesn't exactly inspire confidence. However, Thursday night's 13-10 win over the Jets gives New England a 2-0 record against divisional opponents. Brady would go 19 for 39 with 185 yards, a TD and a sack while rookie QB Geno Smith would go 15 for 35 with four sacks and three interceptions- all three picks coming in the 3rd quarter. Interestingly, all but six of Brady's completions would go to veteran WR Julian Edelman in Thursday night's contest.

After what feels kind of like a bye week, the Patriots will host the Tampa Bay Buccaneers on September 22nd. The Bucs lost their only game so far this season to the jets in the closing seconds on a 48 yard Folk FG as time expired in the 4th quarter. 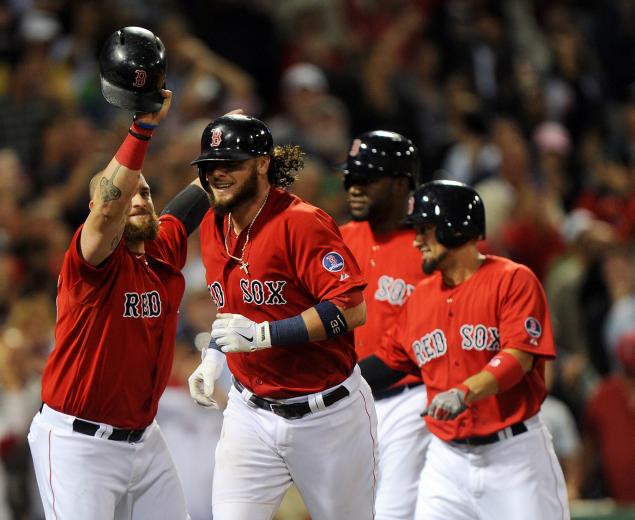 RED SOX- After taking two out of three from the Tampa Bay Rays, the Red Sox returned home for the start of what is their final home stand of the regular season in 2013.

The Yankees would be in town over the weekend and while Boston jumped all over Hideki Kuroda in the bottom of the first for four runs, the Yankees starter settled down while the bats would chip away at the Boston lead. Light-hitting Yankees shortstop Brendan Ryan put the New York on the board with a solo homer in the top of the 3rd off of John Lackey followed by an RBI sac fly off the bat of Lyle Overbay in the top of the 6th. The Yankees made it a 4-4 game thanks to a 2-out, 2-RBI off the bat of 2B Robinson Cano before Brandon Workman came out of the bullpen to strike out Alfonso Soriano to end the Yankees threat.

Shane Victorino led off the bottom of the 9th with a single off of Kuroda before Yankees manager Joe Girardi went to the bullpen. Cesar Cabral ended up hitting David Ortiz with a pitch and walking Jonny Gomes. Girardi then pulled Cabral for Preston Claiborne who struck out Daniel Nava. With one out, Claiborne was a double-play ball away from ending the Red Sox threat, but Jarrod Saltalamacchia had other ideas.

Saltalamacchia belted a grand slam into the right-center seats to put the Red Sox up 8-4 and this time the four run lead would hold as Tazawa and Uehara would come out of the Red Sox bullpen and shut the Yankees down, preserving Boston's 8-4 lead. Brandon Workman gets credit for the win while Kuroda is hung with the loss. The Yankees really needed this one tonight since both the Rays and Indians won to vault ahead of the Bronx bombers and the Orioles and Royals are no more than a game and a half behind New York in the wild card standings.