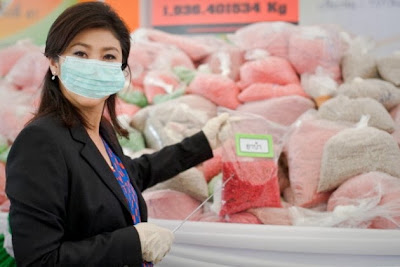 With the series finale of Breaking Bad - AMC's popular drama about a New Mexico high school chemistry teacher who receives a terminal cancer diagnosis and decides cooks meth with a former student- coming up this weekend, it seems as though North Korea wants to get in on the act. But can it really be considered Breaking Bad if you're already in the most despotic nation on the face of the earth to begin with?

A report from South Korea's Chosun Ilbo newspaper from earlier this year alleges that North Korean diplomats have been ordered to sell drugs to give Kim Jong Un's government foreign currency reserves with which the regime uses to reward loyal officials and further their nuclear weapons program.

The drugs in question are said to be locally manufactured crystal methamphetamine produced in state-run facilities, which is then reportedly smuggled across the border and sold in China.

However, some of that meth has made its way back into North Korea or never even left, creating an epidemic of drug users on the most totalitarian state in the world. With a scarcity of medicine, North Koreans have reportedly taken to using meth to alleviate ailments and some defectors claim parents encourage their children to take the drug to help them stay alert for their studies.

Despite official denials from Pyongyang, North Korea has been allegedly raising funds to shore up their foreign currency reserves for years through illicit means- including drug trafficking, counterfeiting, money laundering, arms trafficking and insurance fraud. Many of these activities are said to be overseen from a mysterious agency known as Bureau 39 headquartered inside the ruling Worker's Party headquarters in Pyongyang.
Posted by Fenway_Nation at 10:06 PM