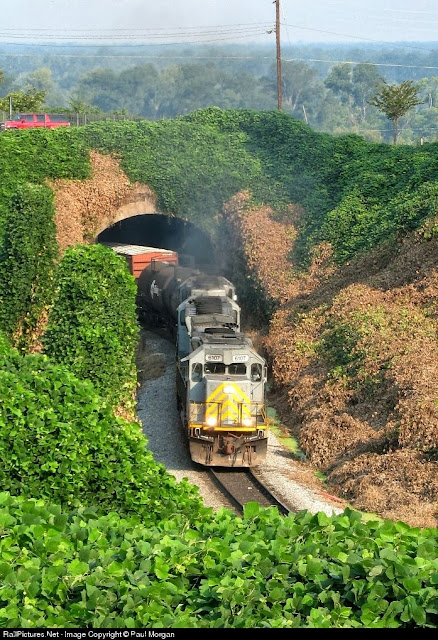 Today's Train of Thought Takes us to Dixie [and SEC country- NANESB!] and features a notorious invasive species that's become almost iconic in the south.

Kudzu was introduced to the southeastern United States as an ornamental and shade plant during the 1883 New Orleans Exposition. At the time, the government was encouraging growth of kudzu for feed stock and erosion control and the Asian plant took to the south. However, when the boll weevil spread across the south and decimated the cotton crops through the 1920s, many farmers abandoned their properties which left the kudzu to spread unchecked throughout the region. The warm, humid climate turned out to be almost ideal for the Kudzu to not only thrive, but expand unimpeded throughout the southeast. By 1997, the federal government listed Kudzu as a Noxious weed and power companies can spend millions repairing damage and clearing lines from the prolific weed. It's also been a problem for the National Parks Service, who maintains historic Civil War battle sites such as Chickamauga and Chattanooga or Vicksburg Battle National Monuments.

And it's in Vicksburg, MS that Railpictures.net contributor Paul Morgan caught eastbound Kansas City Southern manifest freight MXJA- MeXican border at Laredo, TX to JAckson, MI- as it charges out of a tunnel and uphill past a hillside covered in kudzu on September 7, 2006. Former Southern Pacific SD40T-2 # 6107 is in charge on this sunny day as the train has just crossed the mighty Mississippi.

In 1863, Union forces laid siege to the fortified city for 40 days before the Confederate defenders surrendered. Nowadays, Vicksburg is a key crossing of the Mississippi River on interstate 20 and the Kansas City Southern's Meridian Speedway.
Posted by Fenway_Nation at 11:03 AM