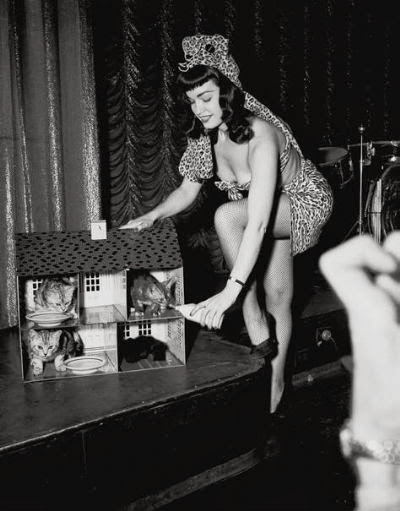 A documentary set to be released in November will reportedly chronicle the later years of famous pin-up model Bettie Page, with parts of the movie to be narrated by Page herself.

Director Mark Mori, who interviewed Page in the late 1990s, enjoyed nearly unprecedented access to the late Bettie Page, who seemed genuinely perplexed over the popularity of some of her photographs some 50 years later. Her time out of the spotlight included being institutionalized for acute schizophrenia and Page passed away in December 2008 at her southern California home at the age of 85.


Set to be released in select theaters on November 22 in New York and on November 29 in Los Angeles, the documentary finally gives voice to the sultry siren of the Southland as she unveils her previously unknown personal life after 40 years of enigmatic seclusion.

Mr Mori's rapport with the publicity shy star (they often shared Christmas cards and the director visited her in hospital one week before she died) gives way to dozens of rare and intimate audio comments as she recounts her troubled childhood (she spent a brief amount of time in an orphanage) and movie star dreams.

But Page's rise to fame, which coincided with the conservative McCarthy era, was short lived. 'The whole Bettie Page phenomenon developed while she was simply off the scene, Mr Hefner explains in the trailer.

Too racy for the times, her images were confiscated suring a police drug raid, and despite cooperating with an FBI investigation, the trailer alludes to a court case in which Page was embroiled over her sexy pinup images.


Fearing legal reprisals at the time, photographer Irving Klaw destroyed most of the photographs and negatives of his shoots with Page after being summoned to appear before the US Senate Subcommittee on Juvenile Delinquency in 1957- apparently unaware that his sister Paula had hidden away some of the images. Some surviving images of Page from the Klaw archive were auctioned off earlier this year- along with candid pictures of Marilyn Monroe, Liz Taylor, Fay Wray and James Dean- at New York's Gurnsey's auctioneers.
Posted by Fenway_Nation at 11:56 PM