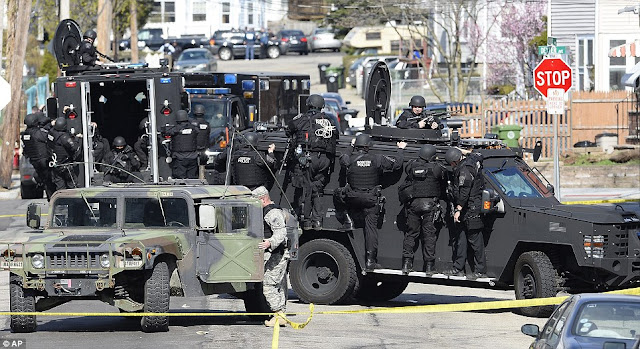 A man stepping outside of his Watertown, MA home for a cigarette on Friday afternoon provided the pivotal lead for authorities in the largest-ever manhunt in the city of Boston.

The city of Boston was under lockdown on Friday morning after a chaotic police chase from Cambridge to Watertown, MA and shootout where two men identified as suspects in the Patriot's Day bombing of the Boston marathon opened fire on police and lobbed grenades at them as they were pursued.

The chaos began on Thursday night when an MIT Campus police officer responding to reports of a disturbance was shot and killed and a motorist in Cambridge was carjacked by two men.


Tarek Ahmed, 45, told Fox News that the victim, whose Mercedes-Benz was reportedly stolen by Dzhokhar and Tamerlan Tsarnaev at the Massachusetts Institute of Technology, was a young Caucasian man between 20 and 25 years old. Ahmed claimed that he was working at gas station on Memorial Drive, when the man ran into his store screaming, “Call the police! Call the police! These people are trying to kill me!”

"I thought he was drunk. I didn't believe him when he came in, it just sounded very crazy," Ahmed said. Despite his skepticism, Ahmed let the man, who has not been identified, inside to use his phone.

"He came very fast and was nervous and was afraid of the guy. He said they pushed him out of car," he said. "He went inside and closed the door. He was shaking and very nervous. I only believe him when the cops came."

Ahmed said that police collected surveillance videos from the station when they arrived, and also took photos from another store across the street where the suspects might have gone inside to purchase something. Police later released photographs of Dzhokar Tsarnaev exiting a Bank of America ATM in Watertown, Mass., at 11:18 p.m., where he withdrew $800, according to the NY Times.

Ahmed, who told reporters that he believed that the suspects had shoved the man out of the car after stopping to withdraw the money, said he was very shaken up after the encounter.

The gunmen were chased by police into a residential area of nearby Watertown- the FBI later claimed that at least five explosive devices were thrown at pursuing officers and the suspects and officers exchanged more than 200 rounds. One suspect, identified as 27 year old Tamerlan Tsarnaev was hit and later pronounced dead at Boston's Beth Israel Deaconess Medical Center. The other, known as Suspect 2 since Thursday Afternoon's FBI Press Conference, was identified as 19 year old Dzhokhar Tsarnaev, the younger brother of Tamerlan. During the firefight, MBTA Police officer Richard Donahue is struck and wounded- he remains in critical-but-stable condition as of Friday night. 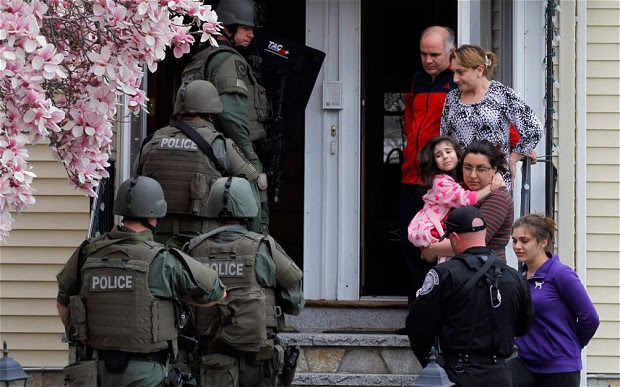 Police immediately set up a perimiter around the Laurel Street area in Watertown and began searching for the subject. Gov Deval Patrick ordered MBTA buses, subways and commuter rail service closed down and area residents were warned to stay inside. Schools in the area- both public schools and the numerous colleges- were shut down as a precaution and a number of events scheduled for Friday night, including both the Bruins and Red Sox home games, are postponed.

By early Friday evening the lockout was lifted and the Massachusetts State Police hold a press conference where they infer that Dzhokhar has likely escaped the dragnet, but was likely still in the state of Massachusetts. That's when Dave Henneberry stepped out for a smoke in the backyard of his Franklin Street home and noticed that one of the straps covering the tarp on his boat was askew and went in for a closer look. That's when he noticed blood streaked along the side of the boat that was parked on a trailer in his backyard. After grabbing a stepladder, Henneberry grabbed the tarp and peered inside, spotting more bloodstains and reportedly seeing a body crumpled inside.

That's when Henneberry retreated back into his house and dialed 911. Not only had Dzhokhar been wounded in the shootout with police, but the 19 year old reportedly ran over his wounded brother in an attempt to get away. 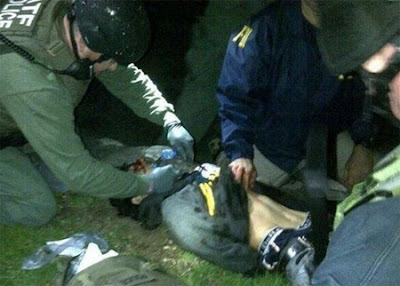 
CAPTURED!!! The hunt is over. The search is done. The terror is over. And justice has won. Suspect in custody.
— Boston Police Dept. (@Boston_Police) April 20, 2013


The announcement led to widespread spontaneous celebrations throughout a city that had been on edge since Monday.


The two brothers were identified as ethnic Chechens from southern Russia. According to the FBI, Tamerlan Tsarnaev was interviewed by the FBI at the behest of a foreign agency in 2011- many speculate Russia owing to the longstanding conflict between Moscow and the breakaway, predominantly muslim Chehcen republic in the south. Tamerlan had reportedly returned to the area 10 years ago using a passport from the former Soviet republic of Kyrgyzistan while Dzhokhar was sworn in as a US citizen on September 11, 2012. The brothers had reportedly been in the country since 2003.

With one suspect dead and the other in custody, police in New Bedford took three people into custody for questioning and searched off-campus housing at UMass-Dartmouth on Friday on reports that the younger Tsarnaev brother may have resided there at one time.