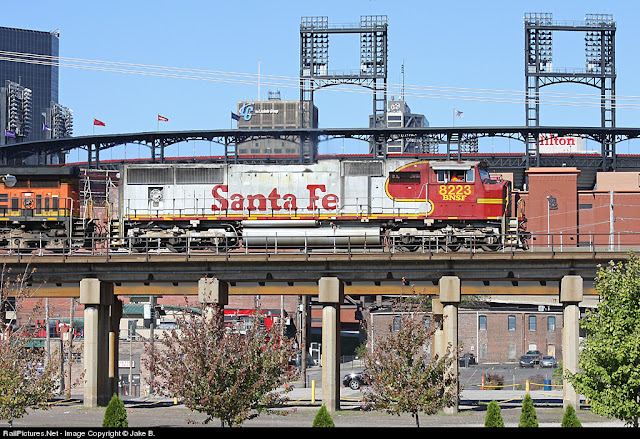 Today's Train of Thought takes us to the Gateway City and the home of perennial NL pennant favorites, St Louis.

Taking up much of the real estate of the old Busch Stadium, the St Louis Cardinals christened their new home [the new Busch Stadium- NANESB!] with a World Series win against the Detroit Tigers in 2006. The conveniently located downtown ballpark is blocks away from the city's Amtrak depot [more of an Am-shack, really, as the original Union Station is now home to a series of upscale shops- NANESB!] and St Louis' Metro Link light-rail links the stadium to both the Amtrak depot and St Louis' Lambert International Airport about 12 miles west of downtown.

Railroad tracks crisscross the area just south of downtown, most of them elevated well above street level on trestles and girders. In addition to the CSX, Union Pacific, Norfolk Southern, BNSF, Kansas City Southern and Amtrak plying their trade in the St Louis area, there are also local shortlines and terminal railroads like the Alton & Southern, Central Midland, Terminal Railroad Association of St Louis and Foster-Townsend Logistics, which took over rail duties from Anheuser-Busch subsidiary Manufacturers Railway in 2011.

Here, railpictures.net contributor Jake Branson caught BNSF SD75M #8223 leading a freight eastbound past the new Busch Stadium on October 15, 2011. The #8223 is still in its as-delivered red and silver 'warbonnet' paint scheme- the last scheme for the Santa Fe before its 1996 merger with the Burlington Northern to form the BNSF.

As for the Cardinals, they had just beaten the Milwaukee Brewers the night before by a 7-1 final in front of a packed Busch Stadium in Game 5 of the NLCS and would go on to close out the series the following night and clinch a World Series berth on the road the following night.
Posted by Fenway_Nation at 3:34 PM