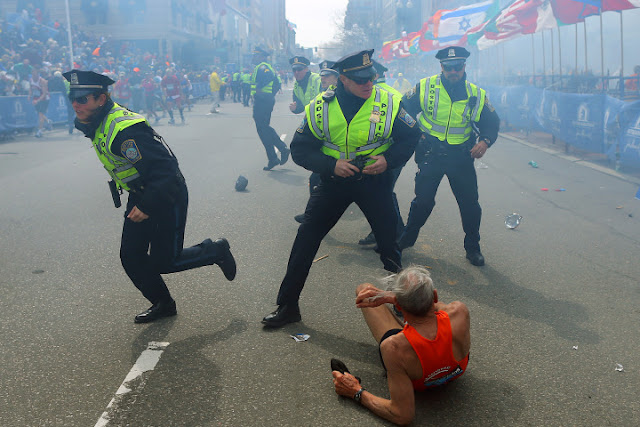 Boston police are reporting that at least 2 people have been killed and 23 injured after multiple blasts at the finish line of the Boston Marathon on Monday afternoon. However, that is just a preliminary estimate and some media outlets are reporting a much higher number of fatalities.
The first explosion took place at the finish line across the street from the Boston Public Library while the second explosion took place 10 seconds later and about 500 feet to the west on Boylston Street- the final approach to the Marathon's finish line. Smoke hung in the air and blood was visible on the sidewalk as runners, spectators and marathon officials scattered and first responders rushed to evacuate the wounded. Spouses, family members and friends of the wounded rushed to area hospitals to try and reunite with their loved ones.

The race had already finished about three hours earlier [Ethiopia's Lelisa Desisa Benti was the men's winner while Kenya's Rita Jeptoo won the women's race- NANESB] but thousands of runners had yet to cross the finish line when the explosions took place. The Red Sox, who traditionally play a day game to coincide with the running of the Boston Marathon, rallied in the bottom of the 9th to beat Tampa Bay some 40 minutes before the blasts.

There were reports of additional explosions after the area had been cleared Boston Fire and Boston Police, although a police spokesman said that at least two of those were controlled blasts designed to disable suspicious devices that were found in the area. EOD units were called to the UMass-Boston's JFK center for reports of an incendiary device found there. The Boston Police is treating the UMass-Boston device and that devices at the marathon as related. Police have also advised people in the area to stay off cellphones, concerned that additional devices could be triggered via cellphones. 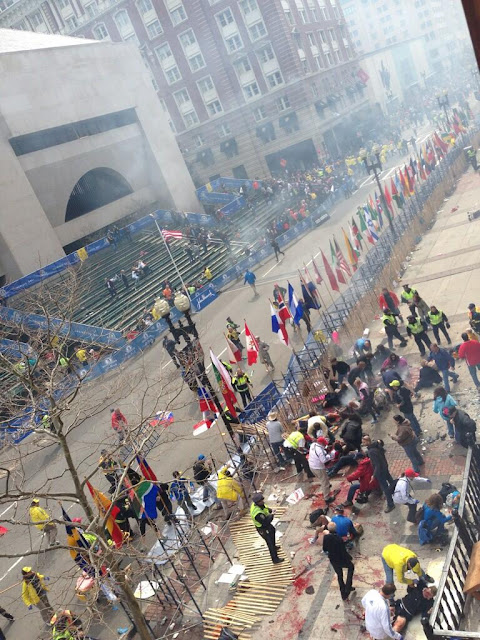 Meanwhile, the MBTA announces they were suspending service on the B and C lines, which runs underneath Copley Plaza. Reports were circulating that an unnamed 20 year old person of interest was under guard at an unnamed Boston-area hospital and that authorities are also searching for a Penske rental van that was reportedly turned away from the area shortly after the blast. The FAA has established a no-fly zone over the site of the explosion.

The FBI is treating the marathon explosions as a terrorist incident and the NYPD has reportedly beefed up security around New York area landmarks. A White House official said that the President was being appraised of developments in Boston and has offered Gov Patrick and Mayor Menino any neccesary federal assistance as the Secret Service and National Parks Police stepped up security around the White House and other government installations in Washignton DC. 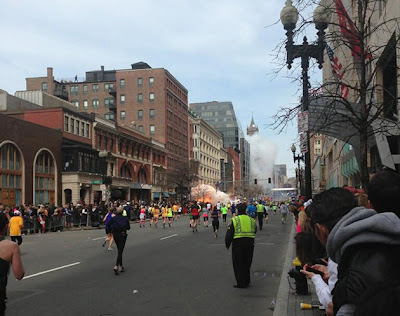 The fact that the bombing took place on April 15th has led some media pundits to speculate the explosions were the work of unspecified right-wing groups. However, between the marathon and Red Sox day game, Boston is virtually shut down for Patriot's Day. Patriot's Day takes place on the third Monday in April and commemorates the Battles of Concord and Lexington- it just happened to fall on April 15th this year.

Patriot's Day is a state holiday in Massachusetts and a huge sports holiday in Boston with a morning Red Sox game followed by the Boston Marathon wrapping up- with the occasional Boston Bruins home game at night [this would normally be time for the Stanley Cup playoffs, but that was delayed due to the NHL lockout- NANESB!]. The Bruins announced that Monday night's home game against the Ottawa Senators at the TD Garden has been postponed.

UPDATE 1- WHDH is reporting that at least one of those killed in the explosions is an unidentified 8 year old.

UPDATE 2- FOX News is reporting that ball bearings were found at the blast sites at the finish line, indicating that the devices were designed to maximize casualties in the immediate area.

UPDATE 3- The Boston Globe posted this video of the explosions taken from the finish line. The second blast is briefly visible in the background at the 21 second mark.

UPDATE 4- Gabriel Gomez, the Republican Candidate for the US Senate seat left vacant when John Kerry resigned to serve as Secretary of State, ran the Boston Marathon today and reportedly crossed the finish line shortly before the first blast.

UPDATE 5- Boston police and federal agents are now combing through surveillance videos and asking witnesses and survivors for any footage that they may have filmed at the time. Bomb sniffing dogs from the Air Force and Amtrak Police department have been brought in to help clear the remainder of the marathon route of any suspect parcels.

UPDATE 6- Police and federal agents from the DHS and Immigration are searching an apartment in nearby Revere, MA. Eyewitnesses report crime scene technicians from the Boston police were hauling away potential evidence in bags. A Revere fire engine and ladder was also on hand at the complex. Authorities declined to specify whether or not the raid was related to the Marathon bombing.
Posted by Fenway_Nation at 2:37 PM