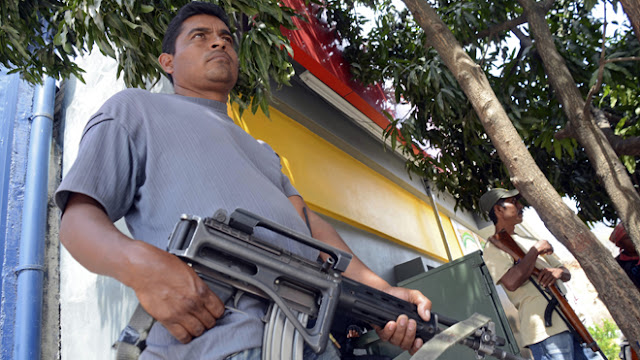 GUERRERO- Hundreds of armed vigilantes in the town of Villa Colorado have detained police officers, seized weapons and set up checkpoints on the main highway through town after the body of one of the 'community defense' commanders was found dumped in the middle of a street last month.


The self described 'community police' and arrested 12 officers and the town's former director of public security, who they accuse of taking part in the killing of Guadalupe Quinones Carbajal, 28, on behalf of a local organised crime group.

The 1,500-strong force has also set up improvised checkpoints on the major road running through Tierra Colorado, which connects the capital Mexico City to Acapulco, a coastal city popular with tourists less than 40 miles away.


The takeover of the police station also enabled the vigilante group to seize far more modern weaponry- such as semiautomatic rifles and pistols- than the single shot hunting rifles or antiquated revolvers that many of these groups had started off with- some members were spotted with the much newer rifles at improvised roadblocks shortly after the officers and public security director were turned over to state officials.

At least one tourist was wounded after vigilantes opened fire on a carload of tourists destined for Acapulco for the Easter weekend after the car refused to stop for the checkpoint in Villa Colorado.


COLOMBIA- According to reports published in Colombian daily El Tiempo, the Sinaloa Cartel is assuming control of an increasing number of Colombia's illegal cocaine production facilities in anticpation of an accord between the Colombian government and leftist guerilla group FARC.


An anonymous official told the Colombian daily El Tiempo that a number of mid-level FARC commanders have sold off their shares in the drug trade in anticipation of the continuing peace negotiations between the guerrilla group and the Colombian government, which is taking place in Havana. Under the agreement, Sinaloa would own and operate illegal cocaine production facilities in South America.

The sale of the so-called drug trafficking franchises marks a move by the Sinaloa cartel leader Joaquín “ El Chapo” Guzmán into the production of cocaine. Mexico’s cartels had previously relied on processed cocaine to be transported to the country from various points in South and Central America.

Crackdowns by Colombian authorities have forced the Mexican drug trafficking organization to take a more hands-on approach on the trade in the Andean nation. The Sinaloa Cartel is allegedly operating processing labs near the border with Ecuador, in the departments of Antioquia, Córdoba and in Norte de Santander, near the country’s border with Venezuela.

The Colombian government and the FARC are looking for points of agreement upon which to build a peace accord. In a joint statement, they said talks will begin with agrarian reform, the first item on the agenda.

FARC- whose acronym translates to Revolutionary Armed Forces of Colombia in English- is thought to be the western hemisphere's oldest active guerrilla army, having been started shortly after a bloody 1950's civil war in Colombia that was known only as La Viiolencia. The Marxist guerillas reportedly enjoyed financial and materiel support from the late Venezuelan president, Hugo Chavez. The armed group had turned to protecting cocoa plantations and production facilities as well as kidnapping and extortion to raise funds at least as far back as Pablo Escobar's heyday. FARC has most recently been active in south central Colombia as well as along the border with Venezuela.


TEXAS- Game wardens with the Texas Parks and Wildlife Department have seized more than two tons of marijuana in the border county of Starr County this week.

A total of 409 bundles of marijuana weighing 4,719 pounds were seized at a home in Starr County near the U.S.-Mexico border in South Texas.

The Wednesday night drug seizure also resulted in the arrest of two individuals who were at the home. A third person escaped.

Officials say some of the marijuana was hidden in an underground bunker at the home.

The crop and two suspects arrested at the scene were turned over to the Border Patrol. The pot seizure is reportedly among the largest in the Texas state agency's history.

PERU- Prosecutors in Lima have charged at least ten Peruvian drug enforcement agents for allegedly conspiring to smuggle cocaine out of the country via Lima International Airport. The narcotics were reportedly destined for a group of Mexican federal officers assigned to Mexico City's Benito Juarez international airport on the payroll of the Sinaloa cartel.

Cocaine being smuggled in from Peru is what reportedly sparked a deadly June 2012 shootout between Mexican federal agents at Benito Juarez International Airport that killed three.


“The killers were part of a gang of officers on the payroll of the Sinaloa cartel that worked at the airport in the Mexican federal capital and allowed drugs arriving from Peru to pass through. They knew which flight the cocaine was arriving on because the criminal organization also included Peruvian drug enforcement agents assigned to the international terminal” at the airport in Lima, the newspaper said.

Mexican officials notified the Peruvian government after the incident and the Dirandro launched an operation in August 2012 to identify the agents allegedly working for the Sinaloa cartel.

Among those under investigation include a major, two captians, a lieutenant and six other officers in the Dirandro- Peru's anti-drug agency.

The charges were filed around the same time a Peruvian "mega comission" accused former president Alan Garcia of issuing more than 400 pardons to convicted drug traffickers.
Posted by Fenway_Nation at 11:38 PM