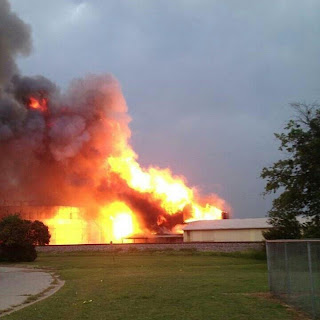 Multiple explosions have at a fertilizer plant in north-central Texas has destroyed scores of homes and prompted the evacuation of a town of about 2700 people just outside of Waco.


Tommy Muska, the mayor of West, which is a community north of Waco, said at a news conference he did not know yet how many people were injured or killed.

KWTX reports dozens have been killed citing a hospital official, but Fox News has not confirmed the report.

MyFoxDFW.com reports as many as 300 people were taken away from the scene with injuries.

Among the damaged buildings was the West Rest Haven Nursing Home, from which first-responders evacuated 133 patients, some in wheelchairs. "We did get there and got that taken care of," Muska said.

Information was hard to come by in the hours after the blast, with even Texas Gov. Rick Perry saying state officials were waiting for details about the extent of the damage.

"We are monitoring developments and gathering information as details continue to emerge about this incident," Perry said in a statement. "We have also mobilized state resources to help local authorities. Our thoughts and prayers are with the people of West, and the first responders on the scene."

Aerial footage showed fires still smoldering in the ruins of the plant and in several surrounding buildings, and people being treated for injuries on a flood-lit local football field, which had been turned into a staging area for emergency responders.

Debby Marak told The Associated Press that when she finished teaching her religion class Wednesday night, she noticed a lot of smoke in the area across town near the plant, which is near a nursing home.

She said she drove over to see what was happening, and that when she got there, two boys came running toward her screaming that the authorities ordered everyone out because the plant was going to explode.

She said she drove about a block when the blast happened.

"It was like being in a tornado," Marak, 58, said by phone. "Stuff was flying everywhere. It blew out my windshield."

She drove 10 blocks and called her husband and asked him to come get her. When they got to their home about 2 miles south of town, her husband told her what he'd seen: a huge fireball that rose like "a mushroom cloud."

The explosion caused the roof of what appeared to be a housing complex of some kind to collapse. In aerial footage from NBC's Dallas-Fort Worth affiliate, KXAS, dozens of emergency vehicles could be seen amassed at the scene. Entry into West was slow-going, as the roads were jammed with emergency vehicles rushing in to help out.

Authorities set up a staging area on a flood-lit high school football field, where the injured were being treated or taken to area hospitals via road or helicopter.

Glenn A. Robinson, the chief executive of Hillcrest Baptist Medical Center in Waco, told CNN that his hospital had received 66 injured people for treatment, including 38 who were seriously hurt. He said the injuries included blast injuries, orthopedic injuries, large wounds and a lot of lacerations and cuts. The hospital has set up a hotline for families of the victims to get information, he said.

Reports from the area incidate volunteer firefighters from the town of West were at the West Fertilizer plant fighting a blaze shortly before the first massive blast. First responders had initially set up a triage center at the local high school's football field, but had to evacuate further away to the West community center due to concerns over toxic fumes from the plant and secondary explosions. In fact, the FAA has placed a temporary flight restriction over the site of the blast and firefighters were reportedly steeting clear of the blast site early Thursday morning due to the fumes. To further complicate things, thunderstorms are expected to move into the area overnight.

There have been no firm estimates of casualties from the explosions, but one public safety official said they could expect at least 60 killed in the initial blast. Six firefighters are also unaccounted for- although there has been no word on which agency. 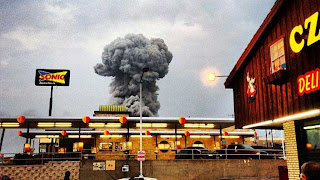 Ammonia-based fertilizer can be used as either an explosive in addition to its intended use as a fertilizer. Most infamously, domestic terrorist Timothy McVeigh used a truckload of ammonia-nitrate to blow up the Alfred P Murrah federal building in Oklahoma City in 1995. The explosion comes within days of two infamous events in Texas and Oklahoma- McVeigh's bombing in 1995 and the deadly 1993 FBI raid on the Branch Davidian compound in Elk, TX, just outside of Waco and some 20 miles away from West.

The blast also coincided with the 66th anniversary of the Texas City explosion, where a fire on board the French flagged Grandcamp docked in Chambers County detonated more than 2000 tons of ammonium nitrate in the cargo hold, killing more than 500 people.

The town of West itself is located about 20 miles north of Waco along Interstate 35 and the Union Pacific's mainline between Austin and the Dallas-Fort Worth area.
Posted by Fenway_Nation at 10:12 PM