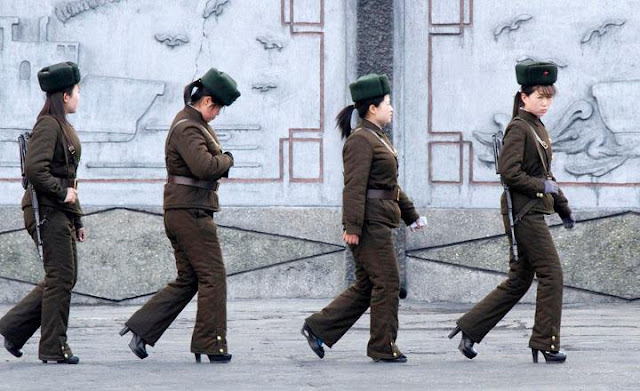 Female North Korean soldiers in high heels on patrol along the Yalu River along the border with China. Reuters photo/Jacky Chen


Tensions on the Korean Peninsula have been ratcheted up in recent weeks as North Korea has threatened to attack South Korea and the United States after the United Nations approved a fresh round of sanctions for the secretive Stalinist nation, up to and including scrapping the 1953 armistice that led to a ceasefire in the Korean War.


A North Korean general said on Tuesday that Pyongyang was scrapping the armistice. But the two sides remain technically at war as the civil war did not end with a treaty.

North Korea threatens the United States and its "puppet," South Korea, on an almost daily basis.

"Since the United States is about to ignite a nuclear war, we will be exercising our right to preemptive nuclear attack against the headquarters of the aggressor in order to protect our supreme interest," the North's foreign ministry spokesman said in a statement carried by the official KCNA news agency.

North Korea conducted a third nuclear test on February 12, in defiance of U.N. resolutions, and declared it had achieved progress in securing a functioning atomic arsenal. It is widely believed that the North does not have the capacity for a nuclear strike against the mainland of the United States.

With tensions high on the Korean peninsula, the U.N. Security Council voted unanimously to expand its sanctions on North Korea. The new sanctions were agreed after three weeks of negotiations between the United States and China, which has a history of resisting tough measures against its ally and neighbor.

The resolution specifies some luxury items North Korea's elite is not allowed to import, such as yachts, racing cars, luxury automobiles and certain types of jewelry. This is intended to close a loophole that had allowed countries to decide for themselves what constitutes a luxury good.

"These sanctions will bite and bite hard," said U.S. Ambassador to the United Nations Susan Rice.

The export of luxury goods to North Korea has been prohibited since 2006, though diplomats and analysts said the enforcement of U.N. sanctions has been uneven.

Shortly after North Korea issued their threats and said they would no longer abide by the armistice the United States deployed stealth bombers for joint excercises with South Korea at the end of March. In response, the North has positioned mobile missile launchers on the country's east coast and blocked South Korean workers from entering a joint manufacturing facility at the border in Kaesong in advance of threatened missile tests. 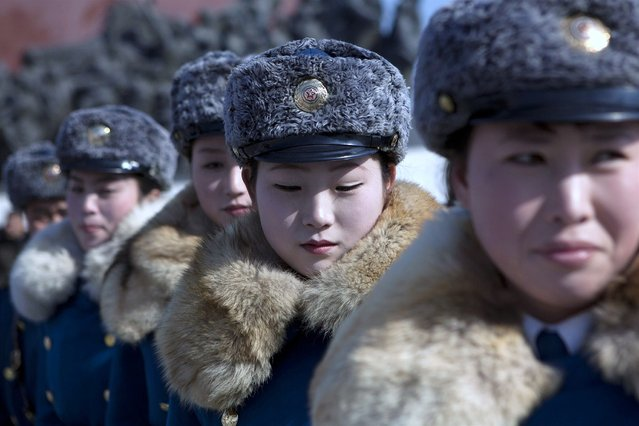 
There has also been a noticeable buildup of troops along China's border with North Korea in recent weeks. China remains North Korea's primary ally in the region, although public sentiment in China seems to have turned against North Korean leader Kim Jong Un for his ill advised nuclear brinksmanship as much of North Korea's population is starving.

China still holds significant leverage with North Korea, but the current situation on the Korean peninsula benefits Beijing by diverting resources from Japan's Self Defense Forces. Since late 2012, Chinese aircraft and vessels have repeatedly made incursions into the disputed Senkaku Islands, which are claimed by both Japan and China.
Posted by Fenway_Nation at 11:12 PM