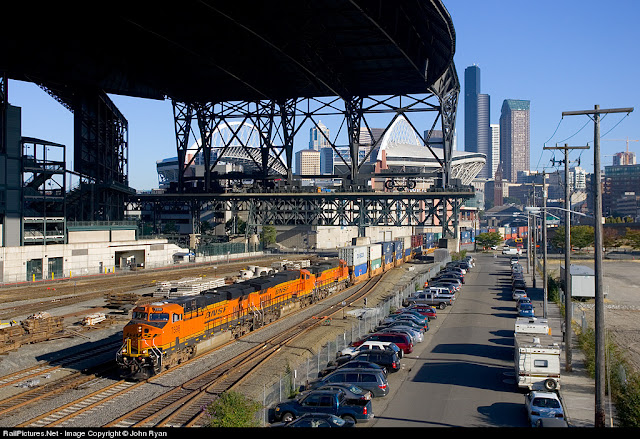 One does not necessarily need to be a Mariners fan or resident of the Pacific Northwest to know about some of the quirks of Seattle's SafeCo Field. Opened in 1999, the ballpark features a massive retractable roof that can be closed so that the ballgame can continue in the event of one of Seattle's infamous rainy days. The roof slides open and closes on massive tracks and on the east end of the ballpark. Of course, abutting the east end of the ballpark is the BNSF mainline through downtown Seattle, with the roof hanging over the line when its fully open.

This has led to broadcasters, including Ford C Frick award winner Dave Niehaus, having to pause their play-by-play not just for a word from their sponsors or station ID but also the air horns of passing trains from the BNSF, Amtrak's Cascade service or Seattle's Sounder commuter rail service. On a clear day or night, the sound of passing trains carries with the roof open since the gantry supporting the tracks the roof opens and closes along overhangs a stretch of the line where the trains have to blow their horns for the South Royal Brougham Way crossing (immediately north of the stadium). Some of the right-field seats reportedly offer a more commanding view of the tracks than they do the field, depending on which way you're facing.

So with that in mind, today's Train of Thought takes us to the Emerald City. Here, railpictures.net contributor John Ryan caught BNSF ES44AC #7598 leading a trio of GE's trundling southbound past the ballpark (and the Seahawk's Qwest Field in the background) with a double stack train destined for the Port of Seattle just to the south on September 11, 2008. The Mariners beat the Rangers by an 8-7 final the night before and will be on the road in Anaheim later on that night. Just to the right is the tower of the ex Great Northern and Northern Pacific King Street Station, which was completed in 1906 and still sees regular use from Amtrak's regional Cascades as well as the Empire Builder or Coast Starlight in addition to Seattle's Sounder commuter rail

Interesting footnote is that the western end of I-90 is just to the east of the ballpark and BNSF line. Up until the 1990s- the easternmost end of I-90 was the Mass Pike which passees right by Fenway Park. After completion of the Big Dig, I-90 was extended further east to Logan International Airport.
Posted by Fenway_Nation at 11:51 AM