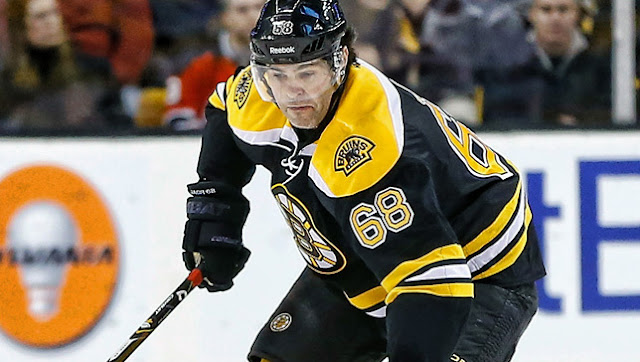 NHL- Seeing the marquee players slated to appear, one could almost be forgiven for mistaking Thursday night's game between the Bruins and Devils at the Garden as some sort of alumni or old-timers exhibition contest.

The weeknight matchup featured two rivals who had clashed with each other numerous times in their respective Hall of Fame careers. Wearing the familiar #68- although in a slightly different black and gold uniform- RW Jaromir Jagr made his Boston Bruins debut after being acquired from Dallas a day before the NHL trade deadline. Between the pipes for the visiting Devils was Martin Brodeur, another future Hall of Famer and product of the 1990 NHL Draft. By contrast, Brodeur spent his entire career with the New Jersey Devils while Jagr is on his 3rd team in two seasons. Having both broken into the NHL more than 20 years ago, these two had no doubt faced each other countless times and the seemingly timeless matchup between the winger and netminder would factor into the final score of a game played 23 years after they were first drafted.

Just a minute and 20 seconds into the second period, Brad Marchand's centering pass went off Jagr's skate and got past Brodeur to put Boston up 1-0. The goal, credited to Jagr, wasn't pretty but it would end up being the difference in Thursday night's contest as Tukka Rask turned aside all 40 shots he faced- including a dozen in the 3rd period. Brodeur would turn aside 25 of 26 shots he faced and both teams went 0-1 on the power play.

The Bruins will head into Montreal riding a 3-game winning streak on Saturday and hope to take the lead in the Northeast division- the Canadiens are currently up by a point in the standings. The puck drops at 7:00 ET and will be televised on NESN, CBC and the NHL Network. 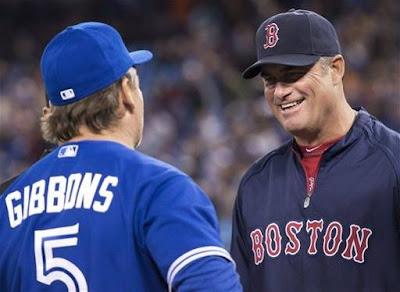 
MLB- After taking two out of three from the Yankees in the Bronx to start off the regular season, the Red Sox headed north for another AL East matchup- this time it was the new-look Toronto Blue Jays. This would mark Boston manager John Farrell's first appearence in Toronto since he was acquired by Boston in the offseason, and not surprisingly he was booed by the home crowd for much of the evening.

That didn't stop the Red Sox from grabbing an early lead, however. With one away in the second, Jays starter Josh Johnson gave up back to back singles to Victorino and Bradley before hitting Jose Iglesias with a pitch to load the bases. Ellsbury would single and drive in a run before Daniel Nava grounded into a double play to end the inning.

In the bottom of the 2nd, Jays outfielder Rajai Davis singled off of Sox starter Felix Doubront before moving to third on a Colby Rasmus double. Mark DeRosa would then bring Davis home on a sac fly to tie the game up at 1-1 before Doubront got Maicer Izturis to ground out and end the inning.

With one away in the top of the 4th, the inning was kept alive thanks to a pair of Emilio Bonifacio errors on ground balls by Victorino and Bradley. Although hhe came on defensively for a few innings, Farrell pulled Iglesias for Pedro Ciriaco in the top of the 4th and he was immediately rewarded with an RBI single to give Boston a 2-1 lead. Boston would take a 4-1 lead in the top of the 5th thanks to a 2-run homer from Mike Napoli. However, in the bottom of the 5th the Jays cut into Boston's lead with a Mark DeRosa solo homer to lead off the inning, followed by a Maicer Izturis single and Jose Reyes bringing him home on an RBI double. However, Reyes was thrown out at third trying unsuccessfully to stretch it out into a triple. With the bases clear, Doubront would allow a single to Emilio Bonifacio before getting the next two batters out.

Doubront would allow a leadoff double to JP Arenciba before Koji Uehara came on in relief and got the first three batters he faced out in the bottom of the 6th. In the top of the 7th, Jays reliever Brett Cecil would come on in relief of Johnson and work his way out of a jam with runners on 2nd and 3rd with nobody out by striking out Victorino, Bradley and Ciriaco. With one away in the bottom of the 7th, the Jays would tie the game up after Junichi Tazawa gave up a 1-out solo homer to Reyes after coming on in relief of Uehara. After striking out Emilio Bonifacio for the second out, Tazawa than allowed a triple off the bat of Melky Cabrera but managed to extinguish the threat after getting Edwin Encarnacion to line out to center.

With one out in the top of the 8th, Esmil Rogers came out of the bullpen in relief of Cecil and Johnny Gomes would hit for Daniel Nava. Gomes would work a walk from Rogers before advancing to third on a Dustin Pedroia double and coming home on a Victornio groundout. Jarrod Saltalamacchia would strike out to end the inning.

Andrew Bailey would come out of the Sox bullpen in the bottom of the 8th and get out of a jam with two on and only one out by getting Adam Lind and Izturus to fly out while in the top of the 9th, the Red Sox got a little bit of insurance thanks to Will Middlebrooks hitting a solo homer to lead off the inning to make it 6-4 Boston.

The Blue Jays had one last chance in the bottom of the 9th after Joel Hanrahan got the first two batters he face out. With the Jays down to their last strike, Melky Cabrera was able to get on base with a walk and bring the potential tying run up into the batters box, but Encarnacion grounded out to second to end the ballgame and preserve the Red Sox win. The win comes despite the fact that the Red Sox left 15 runners on base and were 2 for 19 with runners in scoring position- only slightly better than Toronto's 0 for 10 in the same situation Friday night.

For Saturday's game, Red Sox starter John Lackey is scheduled to get his first start in nearly a year and a half. He will face the Jay's J.A. Happ in a day game from the Rogers Centre with a first pitch of 1:07 PM ET. The game will be televised on NESN.
Posted by Fenway_Nation at 10:07 PM