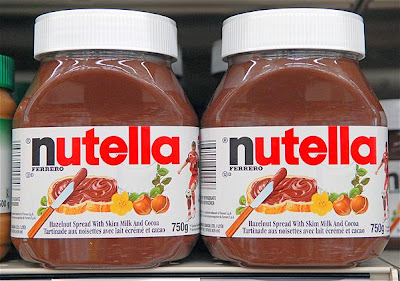 Why stop at maple syrup? Thieves in the central German town of Bad Hersfeld made off with more than five tons of Nutella earlier this week. The popular chocolate-hazelnut spread was stolen from a tractor-trailer on Monday by an unknown number of thieves.


Police said Monday an unknown number of culprits made off with 5 metric tons (5.5 tons) of "Nutella" chocolate-hazelnut spread from a parked trailer in the central German town of Bad Hersfeld over the weekend.

Officials declined to speculate whether this was a well-orchestrated theft or simple joyriding, although a truckload of energy drinks was stolen from a truck in the same town in the last month.

UPDATE- 4/11 - Seemingly determined to prove that Nutella isn't the only yummy contraband sought after by cargo thieves, the Florida Highway Patrol arrested a man who is accused of stealing a truck hauling $75,000 worth of Campbell's Soup from a central Florida truckstop that was destined for a Publix supermarket distribution facility.

That's right- the soup flew the coop and the split pea and ham was on the lam. The fact that the big rig was equipped with GPS enabled officers to track down the purloined broth with relative ease after following it for about 30 miles.

With food prices on the rise internationally, food being shipped to market is becoming as equally popular as electronics, consumer goods and pharmaceuticals but it can be harder to trace. Worldwide cargo theft is becoming a widespread problem [and also the premise for the reality show Big Rig Bounty Hunters on the History Channel- NANESB!]. Even before the July 2012 theft of C$20 million worth of maple syrup at a Quebec warehouse launched a thousand groan-worthy, breakfast-centered puns, cargo theft was on the increase in Canada's Maritime provinces, with the trailers or loads eventually resurfacing in Montreal.

On the US side of the border, the FBI suspects Armenian gangs based in southern California of stealing hundreds of thousands of dollars worth of meat and dairy products by showing up at warehouses throughout the west with fake manifests and affixing the names of other trucking companies to their vehicles. Aside from electronics, cigarettes or pharmaceuticals, other targets for cargo thieves and organized crime throughout the USA apparently include tomatoes, Alaskan King Crab and walnuts.
Posted by Fenway_Nation at 11:37 PM