Home Cooked Sports Chowdah Update- O No You Didn't! Sox Win Home Opener Versus Baltimore; Category Zero Hurricanes Do Little Damage At The Garden; NCAA Title and Unforgettable Week in the Cards for Louisville and Pitino 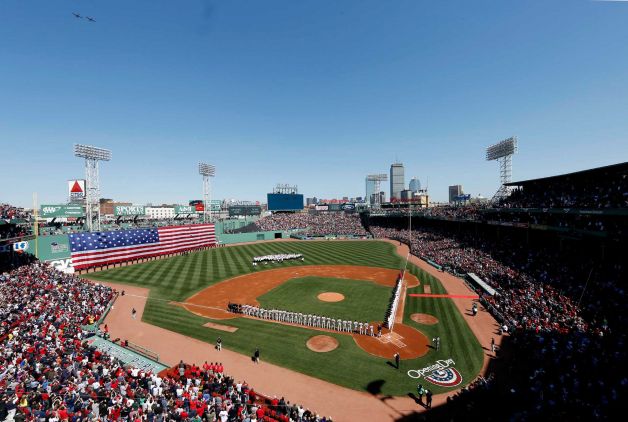 RED SOX- After wrapping up a road trip to Toronto where John Lackey left Saturday's game with an undisclosed injury and Jays starter RA Dickey was rocked by the Red Sox bats, it was time for the home opener at Fenway Park on Monday afternoon. The 4-2 Red Sox opened up the 2013 season at Fenway with a daytime matchup against the Baltimore Orioles.

With pre-game ceremonies that included marking the 60th anniversary of the Red Sox affiliation with the Jimmy Fund, a massive flag draped across the Green Monster and a flyover from WWII-era P51 Mustangs, the Red Sox and Orioles got underway on a sunny April afternoon with Clay Buchholz on the mound looking for his second win and Boston looking to wipe the slate clean after their worst season in nearly 50 years. This was a very different Red Sox lineup from just a year ago with no Youkilis, Gonzalez or Beckett in the lineup while the Orioles were coming off of their first postseason appearence since 1997.

Buchholz allowed a leadoff single to start off the game but seemed to settle down from there. Meanwhile, the Red Sox batters seemed to be having a difficult time with Baltimore starter Wei Yin Chen- who allowed just two hits through the first six innings. However, in the bottom of the 7th, Chen allowed a leadoff single to Dustin pedroia followed by a double to Mike Napoli. Although Chen got Middlebrooks to strike out, Daniel Nava belted a 1-1 offering over the Monster seats to give Boston a 3-0 lead.

As it turned out, that would be all Boston needed. Although Joel Hanrahan gave up a leadoff solo homerun to O's outfielder Adam Jones and a 2-out double to JJ Hardy, Hanrahan managed to close out the game and preserve the Red Sox win by getting Ryan Flaherty to pop out in foul territory in front of the Baltimore dugout. Buchholz threw for 7 shutout innings while striking out eight and allowing four walks.

The win gives Boston a 5-2 record- all opponents being from the AL East so far this season- and the home crowd something to cheer about after watching them win 2 out of three in each of the road series in the Bronx and Canada. The win makes it nine straight home openers that the Red Sox have won. Tuesday is an off day, but on Wednesday, the series resumes with Ruan Dempster [0-1; 5.40 ERA] getting the start against Jake Arrieta [0-0; 9.00 ERA]. The game will be televised on NESN with a first pitch at 7:10 ET.

OTHER RED SOX NEWS- Red Sox fans got quite a scare on Saturday afternoon when starter John Lackey left the fifth inning of the game against Toronto [JA Happ and the Toronto bullpen would throw a shutout against Boston in their 5-0 win- NANESB!]. The start was Lackey's first in nearly 18 months and immediately led to a flurry speculation from sportswriters that Lackey was already out for the season with an undisclosed injury. Lackey had Tommy John surgery in the 2011 offseason and spent most of 2012 rehabbing.

Upon returning to Boston, Lackey underwent an MRI at Massachusetts General Hospital. The MRI reportedly showed inflammation around the right biceps. Although Lackey is expected to miss his next start, the injury is not considered season-ending. If Lackey is unable to start by Sunday, the Red Sox will reportedly slot Alfredo Aceves [0-0; 10.38 ERA] in Lackey's place in the rotation.

MEANWHILE, DOWN ON THE FARM- Shortstop Stephen Drew went 1 for 3 in what was slated to be his final game with the AA Portland Sea Dogs before returning to Boston on Wednesday. Drew went on the DL in Spring Training with a concussion and was assigned to AA Portland for rehabilitation. Overall, Drew went 2-13 with a double, a homer, two walks and 3 RBI. 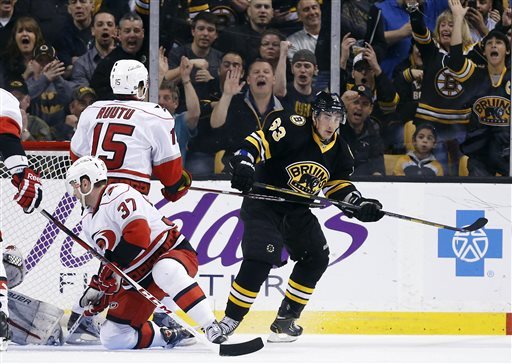 BOSTON BRUINS- After a disappointing Saturday night in Montreal where the Bruins missed an opportunity to vault past the Canadiens in the Eastern conference standings, Boston had the opportunity to vent their frustration on the slumping Carolina Hurricanes on Tuesday night.

Rich Peverly opened up the scoring early for the Bruins about 4 minutes into the first period followed by two Brad Marchand tallies before intermission. Building on their 3-0 lead, the Bruins added to their lead in the second with goals from Andrew Ference and Jordan Caron to make it a 5-0 Boston lead. Midway through the 3rd period, the Hurricanes would get on the board thanks to a Patrick Dwyer goal followed by a Drayson Bowman goal 45 seonds later to make it a 5-2 game. However, with less than four minutes to go in regulation, the Bruins managed to pad their lead after Nathan Horton tapped home a pass from Dougie Hamilton behing netminder Dan Ellis to make it 6-2, what would turn out being the final score.

Carolina's Justin Peters was pulled early after allowing two goals on four shots faced while Ellis turned aside 28 of the 32 shots he faced on Tuesday night. For Boston, Tukka Rask carried a shutout into the 3rd period and ended up turning aside 40 of 42 shots faced. Brad Marchand had two goals in the first period while new acquisition Jaromir Jagr had two assists on the night. The win put the Bruins within a game of idle Montreal on Monday night.

On Wednesday night, the Bruins will travel down to the Prudential Center to take on the slumping Devils for the second time in less than a week. The Devils are riding a 7 game slump heading into the contest. The game will be televised on the NBC Sports Network and gets underway at 7:30 ET.

ELSEWHERE IN THE NHL- With a few weeks still remaining in the NHL season, there are already two teams that have clinched a playoff berth. The Chicago Blackhawks- who did not lose a regulation game until March 8th beat Nashville by a 5-3 final on Sunday to clinch the first playoff spot in the Western Conference.

Meanwhile, the Penguins also managed to clinch a postseason berth on Sunday night- however indirectly. Although the Pens won their Friday night contest against the NY Rangers by a 2-1 final, it wasn't until the Sabres beat the New Jersey Devils in OT on Sunday night that their entry into the playoffs were made official. 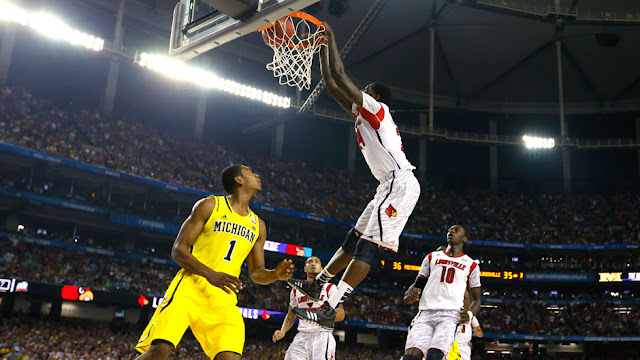 NCAA HOOPS- In a March Madnes that was eerily devoid of UConn's presence, the Men's title remained in the Bluegrass state after a final between Louisville and the Michigan Wolverines at Atlanta's Georgia Dome.

Although Michigan jumped out to the early lead, the Cardinals would close the gap late in the 1st thanks to a dramatic dunk by freshman Montrezl Harrell that looked kind of like this:

Prior to that play, Louisville was trailing Michigan by as much as 12 points in the first. The Cardinals would go on to outscore the Wolverines in the second half by a 45-38 margin to win their first NCAA Men's Basketball title since 1986, winning by a final of 82-76.

This is the second year in a row that a Kentucky school has won the NCAA Men's Basketball title. Cards Junior Luke Hancock was 5 for 5 from 3 point range and made 7 out of 10 free throws, totalling 22 points on the night and was named the Most Outstanding Player of the Final Four.

The week is alread off to a good start for Louisville head coach Rick Pitino. His son was hired by the Minnesota Golden Gophers to replace Tubby Smith, a horse he co-owns won the Santa Anita Derby and now qualifies for the Kentucky Derby and now the former Celtics and Boston University coach will be inducted into the Basketball Hall of Fame in Springfield, MA- all of this news coming before Monday night's Championship game in the Georgia Dome.
Posted by Fenway_Nation at 10:44 PM