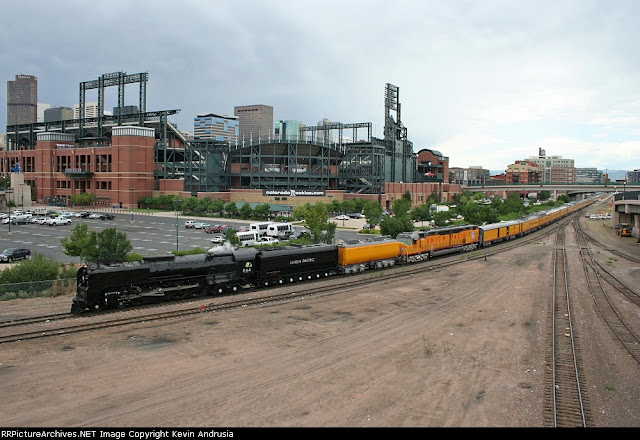 Today's Train of Thought takes us to the Mile High City and features the final steam locomotive ever ordered for the Union Pacific.

Union Pacific took delivery of  4-8-4 #844 from the American Locomotive Company in 1944. After operating on passenger trains like the Overland Limited and Portland Rose, the 844 spent its final two years of revenue service between Cheyenne, WY and Omaha, NE before being withdrawn from service in 1959- but was saved from the scrapper's torch in 1960 as it was selected by the Union Pacific to handle company excursions. The UP also set aside massive 1943 ALCO-built 4-6-6-4 Challenger #3985 to handle similar duties around the same time, but the #844 holds the distinction of being the only steam locomotive that was never retired by a class one railroad [although it was renumbered  to #8444 for awhile to accommodate diesels on the UP's active roster- NANESB!].

In addition to lengthy, interstate trips through several states like when the #844 travelled from its Cheyenne home base to Arizona and New Mexico for those state's centennials last year, the #844 and #3985 can be found closer to home in July shuttling VIPs between Denver, CO and Cheyenne for the Wyoming capital's Frontier Days.

Here, rrpicturearchives contributor Kevin Andrusia caught the #844 pulling ahead past Coors Field, home of the Colorado Rockies, in downtown Denver after dropping offer passengers at Denver's Union Station on July 22nd, 2010. The Rockies were not playing at Coors that day- instead they lost to the Florida Marlins in Miami by a 3-2 final that day- between the All Star Break and an 11-game road trip, there would be very little baseball in Coors Field at the time.

Behind the big 4-8-4 (and the yellow water tender) is Union Pacific DD40AX #6936- the massive 8-axle diesels were the largest single-unit diesel locomotives ever made. Union Pacific was the only customer and by 1986, most of these behemoths were retired, although like the #844 and Challenger, Union Pacific retained one for use on special trains.
Posted by Fenway_Nation at 11:49 PM