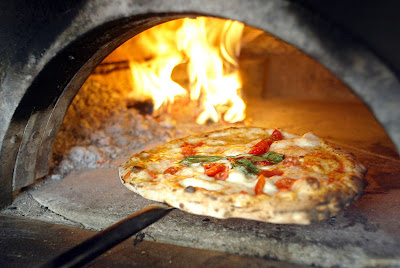 Wow- this is kind of depressing.

Despite a prolonged recession and high unemployment, Italy is facing a shortage of pizzaioili- pizza makers who knead dough and stoke fires in the ovens that cook the iconic Italian dish. The shortage of workers has led to a number of immigrants in Italy to take up work as pizzaioili, with some of them even opening up their own pizzrieas. Many Italians holding out hope for cushy office work or secure public sector jobs and consider the work too demanding for the modest wages it pays.


Italians may be reluctant to get their hands dirty by stoking ovens and kneading dough, but foreign immigrants have no such qualms and are now filling the gap, producing an increasing share of the three billion pizzas that Italians eat each year.

Egyptians have shown themselves to be particularly adept at mastering the art of the perfect pizza and now run many of the pizza restaurants and hole-in-the-wall takeaways in big cities like Rome, Milan and Turin.

"I would say about 80 per cent of Egyptians who come to work in Italy end up as pizza makers," Amadeo Al-Wikel, who emigrated from Cairo to Rome 12 years ago and now runs his own pizzeria on a street corner near Rome's Trevi Fountain, told The Daily Telegraph.

"We are good at it because we are prepared to work hard. Italians, in contrast, want a nice comfortable office job where they can work six hours a day, five days a week, in air-conditioning. They're not prepared to work 10, 12 hours a day." Alessandro Rossi, who runs another pizzeria in Rome, is also surprised that Italians refuse to take up an occupation that is part of their cultural DNA, especially as unemployment among young people has reached 35 per cent.

"The Italian mindset is that being a pizza-maker is humiliating, it is a manual labour job," he said. "Young Italians want to own 40,000 euro cars and wear nice clothes but they are not prepared to work for it. So the gap is being filled by the Egyptians, the Filipinos and the Arabs."

They now play a key role in many of Italy's 25,000 pizzerias, with around 100 Egyptians training as pizzaioli every year. "The Egyptians are supplanting Italians, it's true," he said.

Although pizza pies aren't as culturally ingrained in the USA as they are in Italy, traditional pizzamaking in most of the non-chain restaurants has been handled by staff from Brazil, Mexico, Greece or Colombia. In the northeast, some family-run pizzareias are run by first or second generation immigrants from Greece or the Middle East.