Baroness Margaret Thatcher- the UK's first female prime minister and staunch US ally towards the end of the Cold War- has passed away from a stroke at the age of 87 on Monday. Thatcher, along with former President Ronald Reagan, Pope John Paul II and Polish labor leader Lech Walesa, was one of the most prominent figures in opposing the Soviet Union in the 1980s.

Thatcher got her start in politics as a Member of Parliament representing a district in Middlesex County and was appointed Secretary of Education and Science under Prime Minister David Heath in 1970. After the Conservative Party lost the 1974 general election, Thatcher became leader of the opposition and when the Labour party was ousted in a 1979 general election, Thatcher became Great Britain's first female Prime Minister.

In her first term, Thatcher sought to curb the expansion of the welfare state as well as the influence of labor unions in Britain's political affairs. Even before serving as Prime Minister, Thatcher had publicly made a number of anti-communist and anti-Soviet statements that led one Red Army publication to dub her "The Iron Lady"- a moniker she eventually embraced.

Much of her first term was also marked by strikes, high unemployment, inflation and an approval rating around 22%. Sensing weakness and a much-needed diversion from their own domestic problems, the ruling Argentine military junta annexed the lightly-defended Falkland Islands in the South Atlantic in April of 1982. However, the Argentine junta seriously underestimated Thatcher's resolve and a Britsh task force was immediately dispatched to the South Atlantic. While the USA was initially reluctant to take sides in what an inevitable 'hot' war between two countries considered allies, the United States eventually sided with Britain and provided the Ministry of defense sattelite imagery of Argentine troop movements from the mainland to the Falklands.

After a series of air and sea engagements, the SAS and Royal Army landed on the islands in May and engaged the occupying Argentine soldiers. By June 14th, the last of the Argentine forces had surrendered and the British had re-taken the capital of Stanley. Within a year, the military junta in Buenos Aires was forced to call a general election due to eroding support from their own soldiers and a civilian government was elected in October of 1983.

Thatcher's popularity increased after the Falklands War, demonstrating that Great Britain could still successfully defend her citizens and territory abroad- no matter how far-flung. Thatcher and the Conservative party would enjoy a sweeping victory during the 1983 elections.

In October 1984, Prime Minister Thatcher survived an IRA assassination attempt when a bomb was detonated in an adjoining suite at the Grand Hotel in Brighton, England. Although Thatcher survived, the blast killed five and injured 31. After vising the wounded at the hospital, which included members of Parliament, Thatcher would go on to address the Conservative party conference that morning as scheduled.

Thatcher and then-President Ronald Reagan had much in common and worked closely together throughout the 1980s. The Royal Navy nearly tripled their nuclear capability with the purchase of the Trident nuclear missile system, and in 1986 Thatcher allowed the US Air Force to use RAF bases to launch retaliatory airstrikes against Libya after the bombing of a discotheque in Berlin killed two US servicemen and a civilian and wounded more than 200 others. Intelligence agencies reportedly intercepted a telex from Libya to their East Berlin embassy congratulating them on a "job well done" immediately after the bombing.

Despite profound ideological differences, Thatcher and then Soviet Premier Mikhail Gorbachev maintained a cordial personal relationship with each understanding that the other was firmly committed to their respective country's political system and could not be persuaded otherwise. The reform-minded Gorbachev credited Thatcher with bringing about change and the eventual end of the Cold War.


"We gradually developed personal relations that became increasingly friendly," he said. "In the end, we were able to achieve mutual understanding, and this contributed to a change in the atmosphere between our country and the West and to the end of the Cold War."

"Margaret Thatcher was a great politician and an exceptional person. She will be remain in our memories and in history," said Gorbachev, whose resignation as president December 1991 marked the end of the Soviet Union.

Thatcher would become the longest-serving British prime minister and paradoxically was at times more popular in the USA than she was in the UK. The strong leadership and rejection of socialism make Thatcher popular with American conservatives to this day.

Out of office, Thatcher became an author and public speaker. In 2003, her husband Sir Dennis Thatcher, passed away and Thatcher herself suffered from a series of small strokes that limited her public speaking appearances. 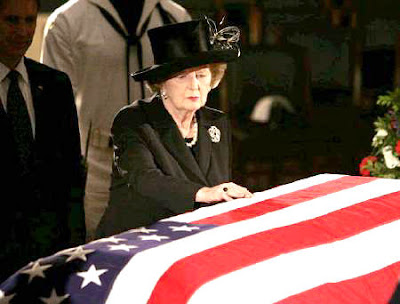 Despite her declining health, Thatcher flew 'across the pond' for President Reagan's 2004 State funeral in which she delivered a videotaped eulogy for her close friend and again in 2006 for a memorial service in Washington DC marking the 5th anniversary of the September 11th, 2001 terrorist attacks against the World Trade Center and Pentagon.

In accordance with Baroness Thatcher's wishes, the former Prime Minister will not recieve a state funeral but will recieve a service at St Paul's cathedral in London with full military honors.
Posted by Fenway_Nation at 3:22 PM