This was something I meant to wrap up on Monday, but as you can imagine, events of that day understandably put any update on the back burner. Sports are an integral part of Boston's social fabric and whoever placed those bombs along the Marathon route clearly took that into account long ago when they were selecting their target. I also want to take this opportunity to thank those of you who were asking about the well-being myself and my family and friends- everybody is OK [some even joking that they knew I was safe since a marathon route was the last place on earth anybody would expect to find me- NANESB!].

For the time being, I'll be posting any developments on the Marathon bombing as a seperate matter- and there have been a number of developments since Monday night. 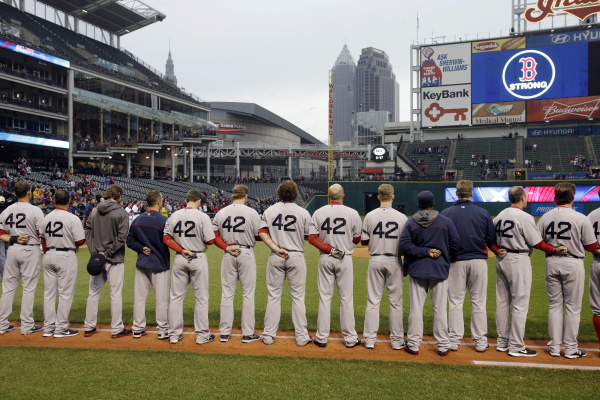 MLB- Monday's deadly marathon bombing took place within 45 minutes of the conclusion of the Red Sox game on Patriot's Day- the Rays were reportedly already on their way to the airport and the Red Sox were still in the clubhouse when the bombs went off along Boyleston Ave.

Security was stepped up at ballparks across the league on Monday night, including LA's Dodger Stadium for Jackie Robinson Night, and by Tuesday, MLB and many teams were showing their support for the city of Boston in the deadly bombing.


Most notably, the arch-rival New York Yankees flew a banner on their stadium with dual Red Sox and Yankees insignias that read "We Stand United"". Fans also were sporting Boston jackets and handmade signs showing their support for the people of Boston, and in the 8th inning, Yankees fans sang along to Neil Diamond's 'Sweet Caroline' as it was played over the PA system- a Fenway tradition. Throughout the night, the scene was repeated in Milwaukee, Atlanta, Chicago, Oakland, Seattle, Los Angeles, Cleveland and Miami- the Brewers reportedly added the extra touch of including the Cheers theme song.

RED SOX- The weekend series at Fenway against Tampa Bay included Friday's game getting postponed due to rain, Clay Buchholz taking a no-hitter into the 8th inning on Sunday and blowing a 2-1 lead in the top of the 9th only to win thanks of a walk off Napoli RBI-double in the bottom of the 9th on Patriots Day.

On Monday afternoon- in the immediate aftermath of the deadly Maraton bombing- the Red Sox left town to play their first game against a team outside the AL East this season. Appropriately enough, the matchup featured a familiar face- former Red Sox manager and ESPN analyst Terry Francona, who was announced as the Cleveland Indians new manager in the offseason.

The pitching matchup featured Ubaldo Jiminez against Felix Doubront and the Red Sox pounced on Jiminez early as the bases were loaded up with one out before allowing a bases loaded walk to David Ross, and then a sac fly to Pedro Ciricaco, an RBI single to Jacoby Ellsbury, a walk to Victorino to re-load the bases, a bases loaded walk. Cody Allen came in to relieve Jiminez and immediately gave up a bases-clearing double to Mike Napoli. Although Middlebrooks struck out to end the inning, the Red sox jumped out to a 7-0 lead.

Doubront was starting to struggle in the fifth inning, allowing a run to come home on a passed ball as well as a sac-fly in the bottom of the 2nd. Although his pitch count was close to 100, he managed to get out of the inning and was able to turn it over to the bullpen, which was able to preserve the five run lead. The Red Sox win their first non AL-East contest of the season by a 7-2 final and Doubront stayed in the game long enough to earn the W.

Interesting side note, this is the second night in a row that the Red Sox players all wore the #42 in honor of Jackie Robinson. The Red Sox wore them to mark the occasion in their Patriots Day game against the Rays. Since Cleveland had Monday night off, they observed Jackie Robinson night on Tuesday.


NHL- Coming into Monday night, the Bruins were riding a two game skid [against the Islanders and Hurricanes- teams I thought they'd have a better showing against] and were scheduled for a pivotal tilt against the Ottawa Senators when the bombs along the Boston Marathon route struck.

The deadly attack resulted in the Bruins to postponing that important Monday night contest- the game is now scheduled for night of April 28th at the garden. Wednesday night's home game against the Buffalo Sabres is still slated to take place as scheduled with the puck dropping at 4:30- the game will be televised on NBC Sports Network.
Posted by Fenway_Nation at 2:57 PM