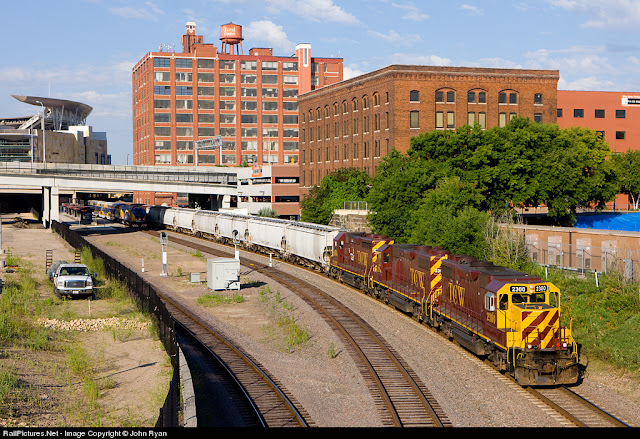 Today's Train of Thought takes us to the Twin Cities, which has seen a number of dramatic changes on recent years as far as both the railroad and sports landscape is concerned.

Since the last time the Twins won the World Series, there was the formation of the Twin Cities & Western, Union Pacific's acquisition of the Chicago & North Western, the merger between the Burlington Northern and Santa Fe, Canadian National's acquisition of the Wisconsin Central, the formation of Progressive Rail, Inc to operate former Milwaukee Road and Minneapolis, Northfield and Southern trackage in the Twin Cities- not to mention the startup of the Hiawatha light rail line and the Northstar Commuter Rail starting in 2008.

The sports landscape has changed as well. The Minnesota Northstars moved to Dallas in 1993, but eventually a new NHL franchise was awarded and the Minnesota Wild began playing in the Twin Cities starting in 2000. Although the Vikings still play in the belegaured Metrodome, the Golden Gophers football team left the dome for TCF Bank Stadium in Minneapolis in 2009 and the Twins began playing their home games outdoors for the first time since 1981 with their 2010 move into Target field

Started in July 1991, the Glencoe, MN-based Twin Cities & Western is actually one of the older shortline operations in the Twin Cities, purchasing more than 100 miles of former Milwaukee Road track west of the Twin Cities. Traffic includes soybeans, ethanol, lumber, molasses, coal,  frozen vegetables, aggregates and of course.....lots of grain. Motive power for the TC&W is typically a hodgepodge of Caterpillar re-engined first generation Geeps, although the line more recently acquired a pair of former Kennecott Copper GP39-2s and restored Milwaukee Road 4-8-4 Northern #261 sometimes shows up on TC&W rails for excursions and shakedown runs. The TC&W is also the parent company of the Minnesota Prairie, Red River Valley & Western and Sisseton-Millbank.

The eastern end of the TC&W connects the line with the Canadian Pacific, BNSF, Union Pacific and Canadian National- four of America's six Class I carriers. But these connections aren't without their own inherent problems. In the late 1990s, reconstruction of Minnesota Route 55 and plans for the Hiawatha light rail made the route less viable. Currently, the TC&W reaches Minneapolis by way of a temporary connection over a former Chicago Great Western line converted into a bike path with the BNSF Wayzata subdivision. To reach the Canadian Pacific interchange in St Paul, the TC&W also has to navigate its way past a number of Northstar commuter rail trains.

Here, railpictures.net contributor John Ryan caught TC&W GP39-2 #2300 leading an eastbound grain-laden freight in Minneapolis, MN on July 16, 2010. The train is making its way across the Mississippi River to the CPR yard in St Paul. In the background, a Northstar commuter train is parked beneath the overpass waiting to depart while even more prominently in the background is the Twins' new home, Target Field.

Incidentally, the Twins beat the White Sox by a 7-4 final that night in case anybody was wondering.
Posted by Fenway_Nation at 2:23 PM