THIS IS OUR F*CKING CITY Sports Chowdah Update- Boston Strong in Homestand Against the AL West; Rask Makes An Effective Lightning Rod; Patriots Trade First Round Pick to Minnesota 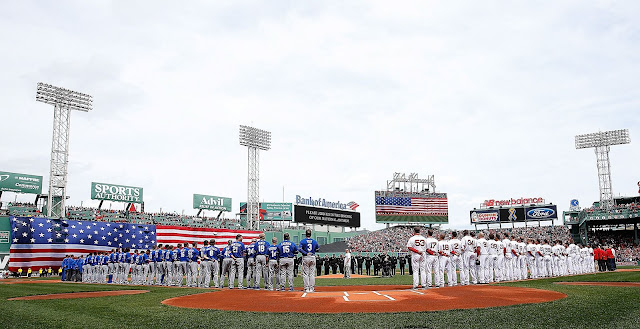 Looks like I have a bit of catching up to do- although given the events of last week, I hope people will understand the delay.

RED SOX- With last Friday's home game postponed due to the largest-ever manhunt in Massachusetts, the Red Sox played their first home game since the April 15th terrorist attacks at the Boston Marathon on Saturday April 20th. The daytime matchup against the Kansas City Royals included a pregame ceremony honoring the first responders and victims. Back from a rehab assignment with AAA Pawtucket, Red Sox DH David Ortiz had some choice words for the people behind the attacks.

The Red Sox would go on to beat the Royals by a 4-3 final on Saturday afternoon, but the Royals would go on to sweep the doubleheader on Sunday. The Oakland A's were next to come into Fenway, and the Red Sox took two out of three from Oakland [Oakland not only chased starter Alfredo Aceves from the mound in their 13-0 win on Tuesday, but chased him all the way down to AAA Pawtucket- NANESB!].

For Thursday night's game, I had to remind myself it wasn't an interleague matchup with the Houston Astros coming to town. The Astros made the jump to the AL West this season after nearly 20 years as a part of the NL Central.

The Red Sox drew first blood early, getting on board with RBI singles from Dustin Pedroia and David Ortiz before RBI's from Mike Carp and Jarrod Saltalamacchia added to the Boston lead, making it a 4-0 game. That would be all the Red Sox would need as Clay Buchholz would allow 6 hits and two earned runs over 7⅔ innings and would get some additional run support thanks to a Big Papi solo homer in the 3rd and RBI singles from Saltalamacchia and Will Middlebrooks to give Boston a 7-2 lead. Andrew Miller and Daniel Bard would close out for the game for the Red Sox, preserving the 7-2 win.

NHL- Twice in less than a week, the crowd at the TD Garden took over singing duties from Boston Garden icon Rene Rancourt. Last Wednesday's game was the first professional sporting event to take place in Boston since the Patriots Day bombings at the Boston Marathon while Saturday afternoon's game was the first since the slaying of MIT campus police officer Sean Collier and arrest of the surviving Marathon bombing suspect.

Interestingly, the Bruins clinched a playoff berth in a pretty anticlimactic manner- the one point they earned from the April 17th shootout loss against Buffalo was all they needed, despite once again blowing a late lead by allowing a power play goal in the final two minutes of regulation.

Coming into Thursday night's game against Tampa bay, the Bruins had been 1-2-1 since Patriots Day, including the emotional post-Marathon game that saw them blow a late lead to the struggling Buffalo Sabres. The B's were hoping to turn things around on Thursday night when they hosted the Tampa Bay Lightning.

All of the scoring would come in the second period, with goals from Dennis Seidenberg and Danny Paille to give Boston a 2-0 lead.

That would be all the Bruins needed as Tukka Rask shut out the Lightning, stopping all 30 shots he faced on Thursday night. The Bruins went 0-1 on the power play while Tampa Bay was scoreless on their three power play opportnunites.

The Bruins will travel to the beltway for their next game on Saturday when they take on the Washington Capitals. Puck drops at 7:00 ET and the game will be televised on NESN and may also be in the NBC Sports network lineup as well. 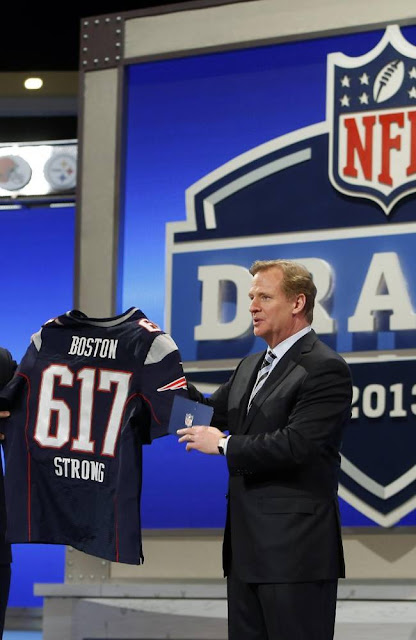 NFL- With former Patriot guard Joe Andruzzi on hand to honor the victims and first responders of the Boston Marathon bombing, the 2013 NFL draft got underway in New York City on Thursday night.

In a somewhat anticlimactic move, the Patriots waited about three and a half hours before deciding to trade their first round pick (29th overall) to the Minnesota Vikings in exchange for four picks in the later round. The Pats obtained picks from Minnesota in the second, third, fourth and seventh rounds this year. Heading into this year's draft, the NFL had a grand total of five picks- their fewest in team history. The trade with the Vikings gives them a grand total of eight picks- none of them in the first round, however.
Posted by Fenway_Nation at 9:28 AM