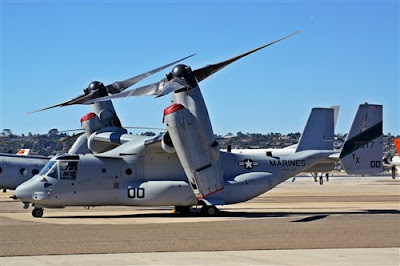 We're bombing a new Muslim dictator with a smaller coalition and no Congressional approval. This is, indeed, change we can believe in.
- Jim Geraghty, National Review

BENGHAZI: Two Aviano, Italy-based U.S. Air Force Pilots were uninjured after their F15E crashed in rebel held territory outside of Benghazi earlier this week. Within a half hour, Marines on the amphibious assault ship USS Kearsarge deployed two Harriers, two CH53E Super Stallion helicopters and two V22 Osprey tilt-rotor aircraft (pictured above) to rescue the downed pilots in what the USMC called a 'tactical recovery of personnel'. At least one of the pilots had reportedly made contact with some of the Libyan rebels before the Marines showed up.

The cause of the crash is thought to be a malfunction, as the F15E was reportedly well beyond the range of ground fire. The two pilots, who's names haven't been disclosed, are undergoing evaluation in Germany.

TRIPOLI: Libyan leader Mummar Ghdaffy is said to be distributing arms to 'volunteers' in the capital city of Tripoli, according to a Pentagon report.

"We've received reports today that he has taken to arming what he calls volunteers to fight the opposition," Vice Admiral William Gortney said on Friday.

"I'm not sure... if they are truly volunteers or not and I don't know how many of these recruits he's going to get, but I find it interesting that he may now feel it necessary to seek civilian reinforcements."

Advertisement: Story continues below The official said Gaddafi "has virtually no air defence left to him and a diminishing ability to command and sustain his forces on the ground" following seven days of coalition air raids.

"His air force cannot fly, his warships are staying in port, his ammunition stores are being destroyed, communications towers are being toppled, his command bunkers rendered useless," Gortney said.

ELSEWHERE : Call it a coalition of the unwilling, I guess. NATO has tentatively agreed to take over part of the multinational operations against Libya, but attacks on ground targets will continue to fall under the command of the USA- which has indiacted it eagerness to relinquish that role.

For a month, gangs of young gunmen have roamed the city, rousting Libyan blacks and immigrants from sub-Saharan Africa from their homes and holding them for interrogation as suspected mercenaries or government spies.

Over the last several days, the opposition has begun rounding up men accused of fighting as mercenaries for Kadafi's militias as government forces pushed toward Benghazi. It has launched nightly manhunts for about 8,000 people named as government operatives in secret police files seized after internal security operatives fled in the face of the rebellion that ended Kadafi's control of eastern Libya last month.

"We know who they are," said Abdelhafed Ghoga, the chief opposition spokesman. He called them "people with bloodstained hands" and "enemies of the revolution."

Any suspected Kadafi loyalist or spy who does not surrender, Ghoga warned, will face revolutionary "justice."

The roundup by the Libyan rebels seems to primarily target black immigrants in Libya, as there were reports of the Libyan dictator hiring black, french-speaking mercenaries from sub-Saharan Africa to crush the protests and uprising that began several weeks ago.

However, long before the uprising many West Africans had also found work in Libya as construction workers and day laborers.
Posted by Fenway_Nation at 1:51 PM