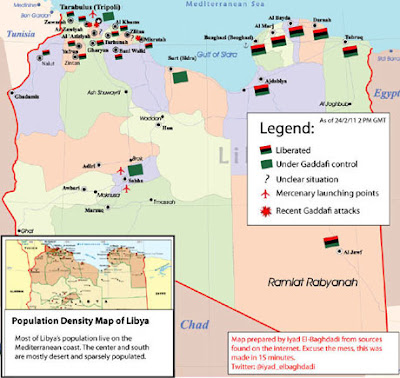 And at this point, I think 'Rebel Strongholds' could mean pretty much everywhere in Libya outside of Tripoli and environs.

As forces loyal to Ghdaffi continued airstrikes against weapons depots and military facilities in rebel-held territory, the US Navy began to move ships off the coast of the strife-torn North African nation. The USS Mount Whitney is already in the Mediterranean while the USS Enterprise is making its way through the Suez Canal after being diverted from the pirate-infested waters near the Gulf of Aden [complete with detained pirates on board- NANESB!]. Secretary of Defense William Gates has also ordered 400 Marines currently stationed in the continental United States to be deployed to the amphibious assault ship USS Kearsarge, which is also making its way through the Red Sea towards Libya.

The US, NATO and the United Nations are discussing possible actions against the Libyan regime, including a naval blockade or establishing 'no fly zones' similar to Iraq before 2003. Canada has dispatched the Halifax-based frigate HMCS Charlestown to the Mediterranean to take part in the international buildup against the Libyan regime. British prime minister David Cameron ordered contingency plans for the UK to enforce a yet-to-be-established no fly zone over Libya in coordination with other NATO members. Cameron also hinted that the UK is considering arming Libyan rebel groups if Ghdaffi continues his crackdown on opposition protesters.

Last week, President Obama signed an executive order placing sanctions against Ghdaffy and his associates while the European Union placed an arms embargo and travel ban against Libya. Already, international observers say that the former Soviet republic of Belarus has violated the arms embargo.

Elsewhere, A council of top Libyan dissidents remained divided on the prospect of foreign intervention, saying that while some groups were considering a request for foreign air strikes under United Nations auspices, the group ultimately opposed foreign military intervention in the crisis.
Posted by Fenway_Nation at 9:49 PM