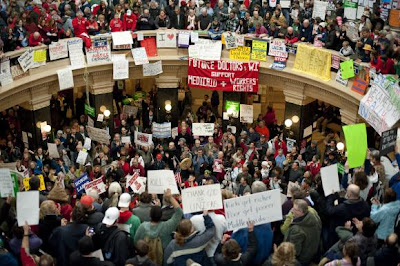 The Wisconsin state Senate managed to circumvent the absence of 14 Democrat state senators to pass a hotly contested bill that would limit the collective bargaining ability of public employee unions on Wednesday Night.

The Senate requires a quorum to take up any measure that spends money. But Republicans on Wednesday took all the spending measures out of Walker's proposal and a special committee of lawmakers from both the Senate and Assembly approved the revised bill a short time later.

The unexpected yet surprisingly simple procedural move ended a stalemate that had threatened to drag on indefinitely. Until Wednesday's stunning vote, it appeared the standoff would persist until Democrats returned to Madison from their self-imposed exile.

"In 30 minutes, 18 state senators undid 50 years of civil rights in Wisconsin. Their disrespect for the people of Wisconsin and their rights is an outrage that will never be forgotten," said Democratic Senate Minority Leader Mark Miller [from the comfort of a hotel room at an undisclosed municipality in Illinois- NANESB!]. "Tonight, 18 Senate Republicans conspired to take government away from the people."

The state Assembly previously approved the original proposal and was set to consider the new measure on Thursday. Miller said in an interview with The Associated Press there is nothing Democrats can do now to stop the bill: "It's a done deal."

Personally, I thought it was the best possible move on Walker's part. Any sort of compromise or negotiations would be rewarding the AWOL Democrats for their conduct. I mean- if you're Walker, what's the worst that could happen? The SEIU, AFL-CIO or AFSCME unions won't donate to your campaign? Protestors occupying the Capitol building for weeks at a time and waving handmade signs comparing you to Adolf Hitler or Hosni Mubarak? Unions bussing in Teamsters from out of state? The SEIU or liberal hacks like David Obey calling for a recall?

When teachers, nurses or firefighters go on strike, who are they striking against? Taxpayers- essentially you and me. And as a bonus, more often than not, their union invariably funnels a portion of their wages (paid by taxpayers) into the coffers of the Democrat party- regardless of the political leanings of some of their members.

State Rep. Nick Milroy is the Democratic state representative from Wisconsin’s 73rd assembly district. He was on America’s Radio News with anchors Chris Salcedo and Lori Lundin. Salcedo pointed out that union membership was split by their votes in 2010, 49% for Democrats and 47% for Republicans, nearly an even split. But unions donated 93% of their total contributions to Democrats in 2010, and 7% to Republicans or others. The question was asked if the assemblyman could understand why Republicans were not in favor of having tax payer funded dues go to fund Democrat campaigns? The assemblyman contended that public employees can opt out of the unions. But when pressed about how even those that opt out must pay union dues, the assemblyman suggested that those people that didn’t want to be part of a union could find other work.

Get that? You’ll be forced to donate to a party that you don’t support, and you’ll like it

This begs the question- if the private sector has been going through such difficult times for the last 2 years or more, why should public sector unions find themselves from cutbacks?

University of Wisconsin law professor and blogger Ann Althouse reports that protesters overwhelmed the Capitol Police and reoccupied parts of the building on Wednesday night and in some instances chained doors to the building shut.

Some union leaders interviewed at the Madison Labor Temple said the abrupt passage could lead to strikes. Officials with Madison Teachers Inc. and the Wisconsin Education Association Council urged teachers to show up to work today, despite a call for a mass demonstration this morning.

Department of Administration spokesman Tim Donovan said although protesters were being encouraged to leave, no one would be forcibly removed. Madison Mayor Dave Cieslewicz said he had instructed Madison Police Chief Noble Wray not to allow his officers to participate in removing demonstrators from the building.

At one point, officials estimated up to 7,000 people had spilled into the Capitol, some coming through doors and windows opened from the inside, including one legislative office and several bathrooms. Some door knobs and door handles were removed, Donovan said.

ELSEWHERE IN THE BADGER STATE: A 43 year old man was arrested after making a bomb threat directed at an Eau Claire, WI aviation company the same day governor Scott Walker made an appearance there last week.

Patrick J. Knauf, 43, of Eau Claire was arrested for the violation of making a bomb scare under state statute 947.015.

The threat was made after 5 p.m. Wednesday, just hours after Wisconsin Gov. Scott Walker made a brief appearance at Heartland.

The incident took place the same day as police found more than 40 rounds of live ammunition scattered throughout the grounds immediately outside the state capitol building in Madison, WI where demonstrations had been taking place for two weeks.