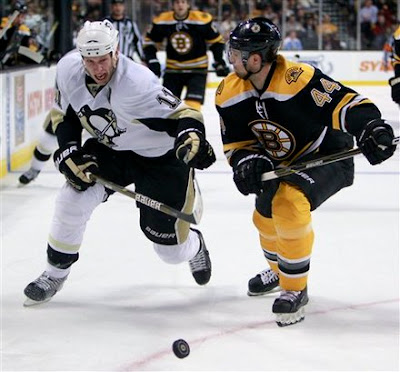 NHL: Like it or not, all good things must come to an end. And although they wouldn't come away from Saturday night's game empty-handed, the Bruins 7-game win streak has come to a close against the Pittsburgh Penguins.

After a scoreless 1st period, Zdeno Chara would get the scoring underway 7 and a half minutes into the 2nd period, beating Marc-Andre Fleury to put Boston up 1-0. However, the Penguins would come right back with a pair of goals a minute and ten seconds apart to put Pittsburgh up 2-1. David Krejci would get the equalizer with 33 seconds remaining in regulation after the Bruins pulled Thomas for an extra attacker.

However, the Pens would capitalize on a Dennis Seidenberg turnover and C Dustin Jeffery got the game winning tally 1:52 into OT for the win. Boston gets the one point for forcing OT, so their point streak continues through at least 8 games, but that's the end of their impressive 7 game win streak.

Tim Thomas stopped 36 of 39 shots while Pittsbugh's Marc Andre Fleury turned aside 29 of 31 shots faced on the night.

Boston's next game will be a rematch of last month's feisty, high scoring affair versus Montreal. This will take place at Montreal on Tuesday night, 7:30 PM ET on NESN. The Canadiens are riding a 4-game win streak coming into the Tuesday night game, having downed Tampa Bay by a 4-2 final on Saturday. 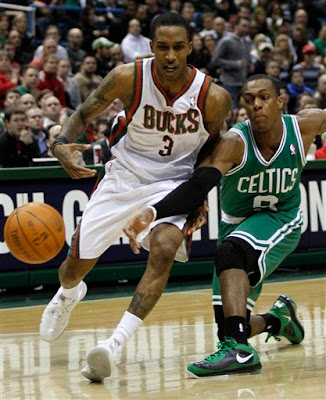 NBA: After a 107-103 win against the Golden State Warriors at the Garden on Friday night, the C's embarked on a quick 1-game road trip to Milwaukee for a Sunday night game televised on ESPN.

Although trailing at the half 43-49 (including being held to only 16 points in the 2nd quarter), the C's would come back and outscore the Bucks 46-34 in the second half to win by the final of 89-83. Paul Pierce led the scoring with 23 points as well as 5 rebounds while Kevin Garnett had 14 points and 11 rebounds.

The C's next game will be at home against the LA Clippers on Wednesday night at 7:30 PM ET on Comcast New England.

OTHER CELTICS NEWS: Interestingly, only 9 players were in uniform for Boston on Sunday night [same w/Milwaukee, but this isn't Not Another Milwaukee Sports Blog- NANESB!]. According to head coach Doc Rivers, Delonte West is likely to return in time for Wednesday's game against the Clippers, but Shaquille O'Neal's return is unlikely.

MLB: While the Red Sox were vicorious in their Friday night spring training game against the NY Yankees, the Red Sox haven't won a game since, falling to the Florida Marlings by an 11-2 margin and reaching a 4-4 deadlock with the Orioles in split squad action on Saturday and losing to the Mets 5-6 on Sunday.

John Lackey will get the start at City of Palms park against Baltimore (or should I say half the Orioles, since they will be doing the split-squad thing) on Monday afternoon at 1:05 PM ET.

NCAA FOOTBALL: The 2011 football schedules for both Boston College and UConn were released towards the end of February. While the dates have pretty much been settled, the game times for the overwhelming majority remain up in the air.

The Boston College football schedule is as follows:

The UConn football schedule is as follows: