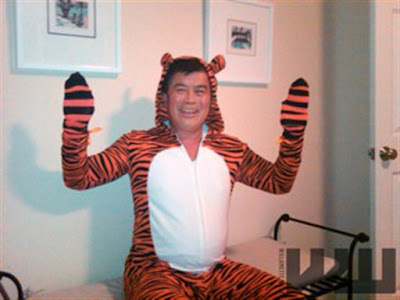 The easiest thing in the world would probably make snarky comments about Democrats, liberals and mental illness until the cows came home, but apparently the conduct of Representative David Wu (D-OR 1) has raised concern from Oregonians and his staff.

According to The Oregonian, Wu's staffers first became alarmed when the congressman delivered a rambling 19-minute speech to Washington County Democrats on Oct. 27. Two days later, Wu reportedly convinced an employee at Portland International Airport to let him through security in order to meet his children, who were arriving from Washington; Wu proceeded to solicit votes from passengers at the gate.

Early the next morning, according to the Oregonian report, Wu sent odd emails to several of his staffers, including one with a picture of himself dressed as a tiger for Halloween. Wu acknowledged Tuesday that he sent the emails, which he called "very, very unprofessional."

Wu's erratic behavior was reportedly behind a number of his campaign and congressional staffers quitting. However, Wu was reportedly exhibiting such behavior well before election day, and perhaps the most disturbing aspect of this story is not Wu's condition, but the fact that his campaign and congressional office decided to conceal the depth of the problem from his constituents- and then jumping ship after the election.
Despite the loss of staff and editorials from newspapers in his district calling for him to step down, Wu insists he'll remain in office and run for another term in 2012.
Quick question- does anybody know what procedures would be in place in Oregon if Wu were to step down? Would there be a special election or could the governor appoint somebody? Are there provisions for a recall? [I'm not up to date on much of this because apparently Oregon isn't as addicted to special Congressional elections as New York is- NANESB!]
[hat tip- Jammie Wearing Fool, Lars Larson]
Posted by Fenway_Nation at 4:03 PM