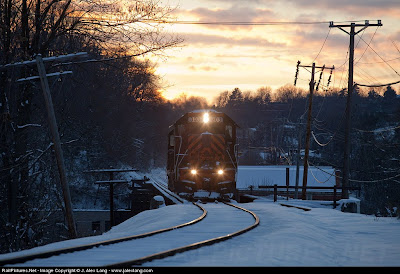 Today's Train of Thought bids us a not so fond farewell to the month of March as we all are getting ready to turn the page on the calendar and welcome the change of seasons.

Here, railpictures.net contributor J Alex Lang and company caught a pair of Wheeling & Lake Erie GP40s running light through the snow at sunset in Castle Shannon, PA on their way back to W&LE's Rook yard in Pittsburgh on December 20, 2009.

The original W&LE had merged with the Nickel Plate Railroad a few years after WWII, while the Nickel Plate in turn merged with the Norfolk & Western in 1964. The current version of the W&LE came about when Norfolk Southern spun off much of the original trackage from both the original Wheeling & Lake Erie and one-time rival Pittsburgh & West Virginia in 1990. Interestingly, the Pittsburgh & West Virginia [AMEX: PW] ceased to exist as a railway with its 1964 merger with Norfolk & Western (now Norfolk Southern) but still functions as a Real Estate Investment Trust (or REIT), owning the land under 132 miles of track as well as various facilities and offices since 1967. Essentially, P&WV owned the land and track and leases it back to the Norfolk & Western (and then the W&LE) under a 99 year agreement.
Posted by Fenway_Nation at 10:24 PM