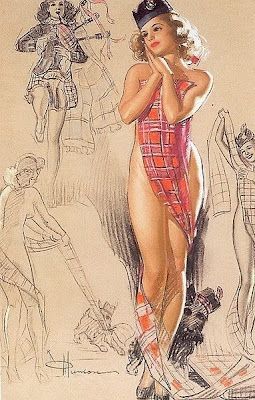 Naturally, this calls for some Celtic eye candy- provided to us this time by artist KO Munson. This untitled, undated piece above was actually one of several done by Munson while in the employ of Brown & Bigelow that featured some sort of vignette prominently in the background. The finished product was also meant to appear as though it was still a rough draft with a series of accompanying sketches.

It's highly likely that Munson was actually depicting a bonnie Scotswoman in the picture above. However, since the work is untitled and several of the themes (such as the tartan and bagpipes) can be found in Ireland, who's to say that this isn't depicting a bonnie Irish lass instead?

And for the love of God, no matter what else you do today TRY not to be this guy, mm'kay?