It's been awhile since I've done one of these, huh? Well, not too surprisingly, events elsewhere had caught my undivided attention and no matter how much I love my teams, I didn't give sports that high a priority in the grand scheme of things. 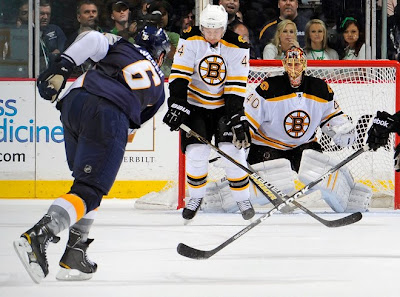 NHL: Coming off their come-from-behind shootout win against the Columbus Blue Jackets on Tuesday with Tukka Rask 'twixt the pipes, the Bruins travelled to Music City on Thursday night to take on the Nashville Predators.

The Bruins got on the board first with a tally from Tyler Seguin in the first, but Nashville (presently 3rd in the Central Division and on the outside looking in for the 8th and final playoff spot for the Western conference) would come right back to tie it thanks to a Sergei Kostitsyn before taking a 2-1 lead on a Colin Wilson tally early in the 2nd. A David Krejci goal made it a 2-2 game heading to the 2nd intermission and Patrice Bergeron was able to get one past Preds netminder Pekka Renne not even 2 minutes into the 3rd to make it a 3-2 Boston lead.

However, Boston would be unable to hold onto the lead and at around the 10 minute mark, David Legwand was able to beat Tukka Rask to tie the game up at 3 and force overtime. At the 3 minute mark in OT, Nashville would get the power play on a holding minor on Steve Kampfer, where Shea Weber would capitalize and get the game winning tally in sudden death OT. The 4-3 OT win means that Nashville manages to stay within 1 point of the Calgary Flames and 2 points of the Dallas Stars and Chicago Blackhawks (both Dallas and Calgary won tonight as well).

After making 34 saves (and stopping all 3 shootout shots faced) on Tuedsay against the Blue Jackets, Rask made 27 saves on Thursday night while Nashville's Pekka Renne stopped 35 of 38 shots faced on the night.

The Bruins have gone 5-2-3 in their last 10 games and 1-2-3 since their 6 game winning streak was snapped earlier this month. Their next game will take place in Toronto against the Leafs and will be televised on NESN and CBC's Hockey Night in Canada (and presumably the NHL network in the USA by extension) at 7PM Eastern time. 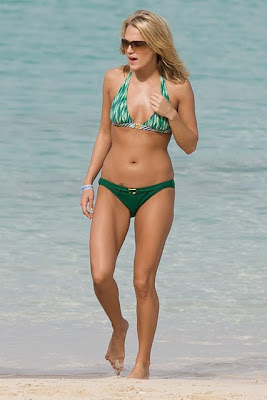 I have to say, I'm supremely disappointed in the Nashville Predators (AKA Mr. Carrie Underwood's team) and their management for not following through on my concept of casting a wide net of aspiring hottie country music starlets in order to lure marginally talented and competent bloggers to Nashville. I mean if that was in fact the means with which they were attracting NHL talent to the Music City, it would stand to reason that bloggers with way too much time on their hands would be next, right?

OTHER NHL NEWS: The league had decided not to suspend Zdeno Chara after a hit against Max Pacioretty left the Montreal winger with a concussion and fractured vertebrae. NHL senior vice president of operations Colin Campbell- who usually hands down supplemental punishments for controversial hits like Chara's- had to recuse himself from any decision because his son Gregory Campbell and Chara are teammates. NHL executive Mike Murphy had decided not to suspend or fine Chara after reviewing video of the hit- Chara was given a major penalty and game misconduct in the 4-1 loss to Montreal last week.

MLB: Red Sox pitchers Daisuke Matsuzaka and Hideki Okajima have been in contact with their families back in Japan since last week's massive earthquake and deadly tsunamis. Their immediate families are with them in the states, while Matsuzaka's parents presently reside in the Tokyo area, some 200 miles south of the epicenter from last week's quake. Most of Hideki Okajima's family lives in the southern Kyodo reigon of Japan.

The two pitchers appeared in a videotaped appeal for donations towards the relief efforts in Japan that will be made via the Red Sox foundation. Along with Matsuzaka and Okajima, pitchers Junichi Tazawa and Itsuki Shoda collected donations from fans arriving at the home plate entrance of City of Palms park before the Monday night game against the NY Yankees.

NBA: The Celtics have hit something of a rough patch over the last week or so, dropping three out of their last 5 including games against the Clippers, Nets and 76ers. However, they were able to pick up a W at the Garden in Wednesday night's game against the Indiana Pacers. Acquired from the Oklahoma City Thunder, F Jeff Green came off the bench for Boston with 19 points and 3 rebounds, while Paul Pierce led the scoring for the starters with 20 points.

Although they trailed in the first quarter, the Celtics managed to get by the Pacers by a final of 90-82. Their next game is on Friday night at Houston- the game gets underway at 8:30 ET

NFL: You know what? Back when they were still playing, I thought any talk of a lockout was outlandish and farfetched. I mean surely the owners, league and players wouldn't be so tone-deaf to think that in this epoch of soaring food or fuel costs, record home foreclosures and high unemployment that some highly publicized melodrama between multimillionaires and billionaires would capture the public's attention or sympathy, would they?

Well- turns out I was wrong. Now it's too early to write off the 2011 season entirely, but all indications are that players and management are still miles apart when it comes to any sort of labor agreement.

NCAA HOOPS: OK, so my bracket-fu ranges from weak to nonexistent.

With that said, New England will be represented by a couple of teams as March Madness gets underway. To hardly anybody's surprise, the UConn Huskies handled Bucknell pretty easily, winning by a final of 81-52 on Thursday. The win sets up a meeting with another Big East team- the Cincinnati Bearcats on Saturday the 19th.

The BU Terriers will have something of an uphill battle on Friday when they're scheduled to take on the #1 seed Kansas Jayhawks at the BOK Center in Oklahoma City at 6:50 PM ET
Posted by Fenway_Nation at 11:26 PM