Not Another Obligatory Libya Update!

Despite the antipathy between Israel and the Arab world, an Israeli remix of one of Mummar Ghdaffi's defiant speeches set to a thumping techno soundtrack by an Israeli DJ seems to have gained traction among Arabic netizens.

Apparently a few months before the uprising, the US Government had stealthily consented to selling at least 50 refurbished M113 armoured personnel carriers to the Libyan military.

Congress balked, concerned the deal would improve Libyan army mobility and questioning the Obama administration's support for the agreement, which would have benefited British defense company BAE. The congressional concerns effectively stalled the deal until the turmoil in the country scuttled the sale.

As all military exports to the regime were suspended last week and President Barack Obama told Gadhafi he should step down, the State Department's Directorate of Defense Trade Controls informed Congress that the troop transport deal had been returned without action — effectively off the table, according to U.S. officials who spoke on condition of anonymity to describe the deal's sensitive details.

State Department spokesman Mark C. Toner said the proposed license was suspended along with the rest of "what limited defense trade we had with Libya."

The Gadhafi regime's desire to upgrade its troop carriers was so intense that a Libyan official told U.S. diplomats in Tripoli in 2009 that the dictator's sons, Khamis and Saif, both were demanding swift action. Khamis, a commander whose army brigade reportedly attacked the opposition-held town of Zawiya with armored units and pickup trucks, expressed a "personal interest" in modernizing the armored transports, according to a December 2009 diplomatic message disclosed by WikiLeaks, the whistleblower website.

Currently, the majority of Libya's military arsenal currently comes from either Russia or France. 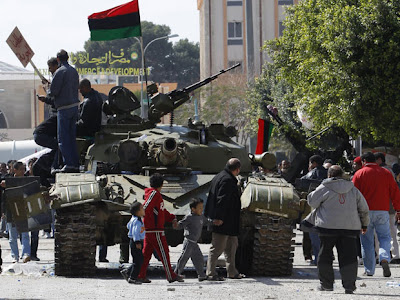 Meanwhile, forces loyal to Mummar Ghdaffy used tanks rockets, artillery and airstrikes to lauch a fierce counterattack on rebel forces approaching the capitol from al Zawiyah, about 30 miles to the west of Triploi. Armor from forces loyal to Ghdaffy is reportedly probing the depleted defences of the city and firing randomly at homes on the outskirts before attempting to make their way to the rebel-held city center.

There have also been reports of Serbian mercenaries piloting Libyan aircraft bombing rebel positions, although Belgrade has denied this early on. Libyan rebels who claimed they managed to down two aircraft over Ras Lanuf insisted that the pilots they captured were in fact Syrian.

The insurgents told the relatively reliable Al-Sharq Al-Awsat, as translated by the Lebanese news portal Iloubnan.info, that the government is using mercenary pilots from Syria, Algeria, Ukraine, Serbia and Romania to fly air force warplanes because Libyan pilots are no longer considered reliable.

The loyalty of Libyan Air Force pilots was put into question when two Colonels from Libya's Air Force disobeyed orders to bomb protesters in Benghazi and instead flew off to the island nation of Malta with their French-made Mirage fighters and sought asylum. [Let it be noted that the Maltese have a sense of humor, at least- the two Mirages are listed as being for sale on the Malta-based classified ad site Maltapark- NANESB!] 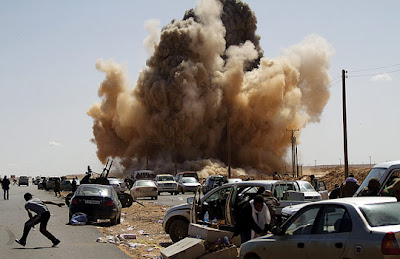 Despite the unreliability of some of the Libyan pilots, Ghdaffi's forces hold the edge in air supremacy over the rebels. This has led to calls for a 'no fly zone' similar to what was imposed on Saddam Hussein's Iraq between 1992 and 2003. The USA, UK and NATO are reportedly exploring a 'range of options' regarding the situation in Libya and defense ministers from the USA and Europe will discuss the possible ramifications of establishing a no-fly zone across Libya in order to prevent Ghdaffi from bombing his own people. Canadian and British officials have talked of openly arming Libyan rebels opposing Ghdaffi while the Obama administration has proposed arming the Libyan rebels using Saudi weapons and resources. Already, NATO has stepped up surveillance flights over the country. 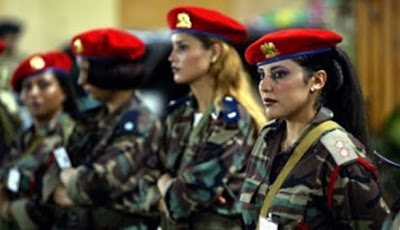 Exit question: Assuming they survive, once Ghdaffi bites it, who's going to get custody of his all-girl bodyguard squad?
Posted by Fenway_Nation at 11:13 PM