Today's Train of Though- The Weather Outside? Still Kind of Frightful, March 27, 2011 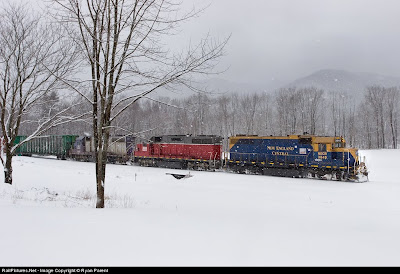 One sure sign that spring is right around the corner? We're less than a week away from the start of baseball season!

But don't let that lull you into a false sense of security, as the weather in New England is always subject to dramatic change with no warning. One minute you could be enjoying tempratures higher than those in Florida or California, and the next you could be reduced to a shivering, soggy mess by an abrupt snowstorm or freezing rain.

Of course, railpictures.net contributor Ryan Parent likely didn't have that problem when he snapped this picture of northbound New England Central train 323. Since this picture was taken at the beginning of February 2008, Parent likely knew he was in for at least another month of inclement weather before 'mud season' but braved a snow squall to catch NECR GP38 #3849 and two other Rail America GP38s heading north through Cornish, NH.

The unassuming Granite State town of about 1600 was home to the reclusive author JD Salinger and two covered bridges, including the 1866-built 450 ft-long Cornish-Windsor covered bridge spanning the Connecticut River between Cornish and Windsor, VT. Traversing the former Central Vermont Railway line to White River Jct and north to Burlington and St Albans, VT, train 323 will cross the Connecticut River into Windsor a few hundred yards to the south of the Cornish Windsor bridge on a steel trestle.
Posted by Fenway_Nation at 8:38 PM