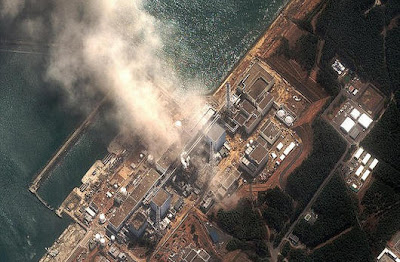 Workers attempting to bring the damaged reactors at TEPCO's Fukushima Daiichi nuclear plant under control were evacuated temporarily on Monday after a plume of grey smoke rose from the plant's reactor #3.

The last two reactors to be hooked up to power from the main grid today were reactors No. 3 and No. 4, the two most badly damaged units, company officials told a briefing.

The company, meanwhile, is checking for damage to the plant's reactor cooling systems and other plant machinery before attempting to power them up.

It is operating equipment using grid power at reactor No. 5 only, one of the least damaged reactors, the officials said.

The cooling systems - designed to protect the plant's six reactors from a potentially disastrous meltdown - were knocked out by the March 11 earthquake and tsunami, and engineers have been battling rising temperatures ever since.

Workers had been struggling all week to shut down the quake damaged reactors after the strongest quake in Japan's recorded history and subsequent tsunami damaged some of the backup power and cooling systems. While the surrounding 12 miles of the plant were evacuated, some 200 Volunteers have been working in shifts of 50 each to operate the equipment, monitor gauges and clear obstructions from the various pipes in the facility. 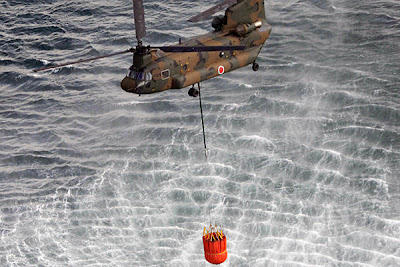 The JSDF had also been called in last week to use Chinook helicopters to dump seawater and a compound consisting of boron onto the overheating reactors. This step was considered a 'last resort' by many observers as the salt water would be highly corrosive, meaning that the reactors could never be used again. The JSDF had also brought in at least six fire trucks capable of continuously pumping seawater onto spent fuel rods and overheating reactor #3.

Meanwhile, over the weekend, the Japanese government had reported that higher than normal levels of radiation were found in spinach and milk at farms in the vicinity of Fukushima- some farms as far as 100km away. While positioned off of Japan's east coast, the USS Ronald Reagan had detected increased levels of radiation last week and 17 crew members had to undergo decontamination after returning to the carrier from search and rescue duties.

ELSEWHERE IN JAPAN: As the situation unfolds in Fukushima Daiichi, more eyewitness video is surfacing demonstrating the staggering impact of the quake (which the USGS has officially changed to 9.0) and subsequent tsunami. This video embedded below shows black, churning water cascading over a seawall at Miyako in the Iwate prefecture while boats and cars caught up in the wave getting tossed around like bathtub toys

Another videotape has surfaced that was filmed from inside a car driving right next to the coast when the tsunami hit.

Searchers and rescue workers have discovered survivors in the rubble or washed out to sea in the week following the quake, including a 4 month old baby girl in the town of Ishinomaki, an 80 year old woman and her 16 year old grandson were pulled from the rubble of their home in the same town nearly a week later and a 60 year old man was rescued after being stranded on the roof of his demolished home that was washed 10 miles out to sea.
Posted by Fenway_Nation at 10:32 PM