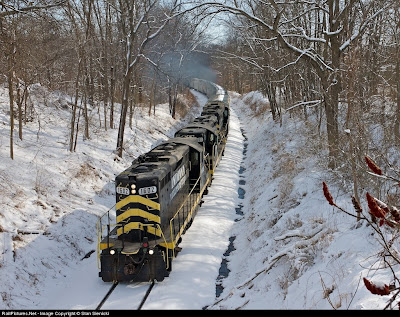 In keeping with the snow theme while there's still some on the ground in various parts of the country, today's Train of Thought brings us to the Hoosier state and the all-EMD shortline Indiana Northeastern.

The Indiana Northeastern- not surprisingly operates in the northeastern corner of Indiana as well as the far northwestern corner of Ohio where it connects with the Norfolk Southern at Montpelier, OH and the former Hillsdale County Railroad (nee New York Central) trackage between Jonesville and Sturgis, MI where it connects with Pioneer Rail corp's Michigan Southern (and onto another connection with the NS line between Elkhart, IN and Kalamazoo, MI currently being leased to WATCO's Grand Elk Railroad at White Pigeon, MI). Besides agricultural products such as corn, soybeans, wheat and flour, the IN also hauls coal, lumber, glass and chemicals among other commodities.

Here, railpictures.net contributor Aaron C Schlegel caught a Northbound Indiana Northeastern freight ducking under the Fox Lake Rd bridge in Angola, IN with a lashup of power that prominently features first generation power- the two lead units are largely unmodified GP9s. According to the Diesel Shop, the lead unit- Indiana Northeastern #1601 started out life as Reading #606 in August 1952 while Indiana Northeastern #1602 was built in April 1957 as Great Northern #693 and bringing up the rear is the only slightly newer 1963-built GP30 #2230, which was built as Pennsylvania railroad #2230.

Both the 1601 and 1602 retain their classic as-built high hoods- and it's entirely likely that each unit was ordered to replace the last of the serviceable steam locomotives on their respective railways (Reading & Great Northern). 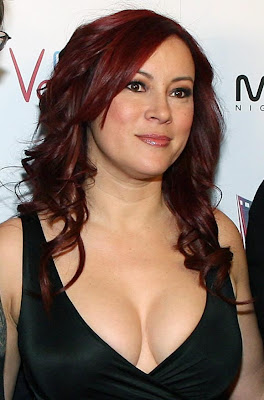 Like the 2 lead units, another worthwhile product of the 1950s would include actress and World Series of Poker participant Jennifer Tilly. I know I've mentioned this before, but even though I don't regularly follow Poker tournaments or the latter day entries in the Child's Play series of movies, I still continue to be impressed at how Tilly continues to be easy on the eyes just past the half-century mark [I know I can't be the only one- NANESB!].
Posted by Fenway_Nation at 9:01 PM