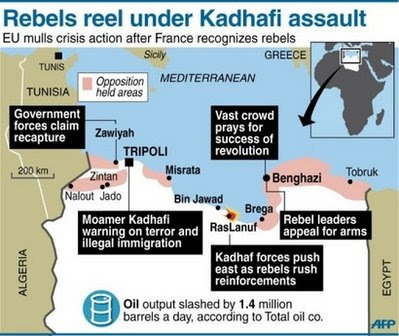 Mummar Ghdaffi's forces struck back at rebel-held cities in the eastern part of Libya with airstrikes, missiles, tanks and artillery this week, retaking the oil port of Ras Lanuf and have made it as far east as Ajdabiya- some 100 miles south of the rebel stronghold of Benghazi. 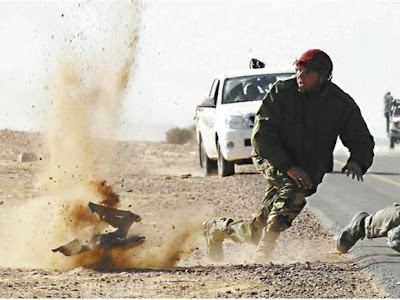 Earlier in the month, the Libyan rebels- increasingly made up of soldiers who had defected from the Libyan Army- had made their way westward from Benghazi to the outskirts of Tripoli before being steadily pushed back eastward to their stronghold by Ghdaffi's forces.

Since then, the beleaguered Libyan rebels have been requesting assistance from outside the country- including arms and the possible imposition of a no-fly zone against Ghdaffi's Air Force.

In rebel-held eastern Libya, patience for diplomatic niceties is running short. At a checkpoint near the contested town of Ras Lanuf, Saluhaddin Sultan, 38, a rebel who used to work as a kitchen worker at an oil plant, gestured angrily and said: "Why aren't the Americans doing anything? They just watch and talk. Gaddafi has heavy weapons and he is killing us."

There was a personal reason for his anger. His brother-in-law and nephew, also fighters, had died a day earlier when their car was hit by one of Gaddafi's jets.

"We are fighting for our revolution, but we cannot protect ourselves from the planes," he said.

A couple of miles along the road from the checkpoint were two deep craters on the road edge, from another bombing raid which had killed a family in their car as they fled the fighting.

Jalal Elgallal, a Benghazi businessman educated in Britain who supports the revolution, added: "I lived in Britain for years, I admire Britain - as most Libyans do - and I would expect Britain to help the underdog. If we get a no-fly zone he can't bomb us, and our fighters could march on Tripoli and end this.

"We need your help to get rid of Gaddafi. Just think about what he has done to you in the past - Lockerbie, Yvonne Fletcher, terror attacks.

"This is your chance too to get rid of him. We could get rid of him quickly with some foreign help, otherwise doing this could cost tens of thousands of lives."

In Cairo, the Arab League called for the United Nations Security Council to establish and enforce a no-fly zone during an emergency meeting last week. 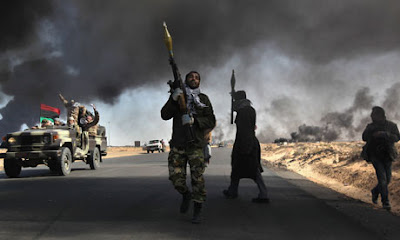 British Prime Minister David Cameron and French President Nicolas Sarkozy have also supported a Libyan no-fly zone while President Obama has been ambivalent at best and Germany and Russia have expressed doubts.

The British and Lebanese have put forth a proposed resolution at the United Nations Security Council that would present a 'menu' of options the international community could use to curtail the activities of Ghdaffi's regime and military. However, it's thought that Russia and China- permanent members of the UN Security council- are likely to oppose any external military intervention against the Libyan regime.
Posted by Fenway_Nation at 11:49 PM