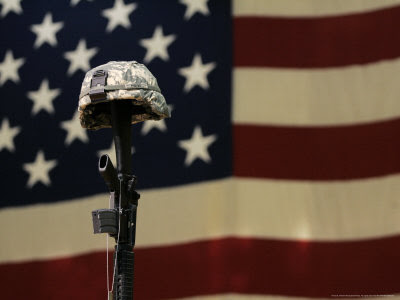 Perhaps its just me, but there seems to be a much more profound and marked sense of loss between Veteran's Day (or Rememberance Day for those of you in Canada) last year and this year's fairly easy to remember 11/11/11.

Aside from the fairly recent loss of a WWII veteran in our own family, it seems as though we aren't aware of figures such as America's last WWI veteran or one of the remaining Navajo code talkers until they've left us. Even though more famous individuals such as Family Circus cartoonist Bill Keane and Baseball Hall of Famer Bob Feller served honorably in our nation's armed forces, that only seems to be highlighted in their obituaries.

And that's not even including the veterans of more recent conflicts such as Iraq or Afghanistan, who are currently facing an inexplicably higher unemployment rate than the civilian population. I'm not quite sure what to make of that either, since you'd assume that recently discharged veterans would have a certain amount of training, experience in much more stressful situations and leadership skills that potential employers would find desirable.
While the Senate recently passed legislation that would provide tax credits for companies that hired recently discharged veterans, I don't see how it would do much good until the economy in general improves.

While this humble blogger did serve in the United States Army, this was in the epoch before pixellated camouflage, velcro nametags or unit patches and Stryker brigades. In fact, since my honorable discharge, my former division has moved on the bigger and much more audacious things.
For those of you that have served, I can only offer my sincere gratitude and appreciation.

Thanks you and may God bless America.
Posted by Fenway_Nation at 11:11 AM