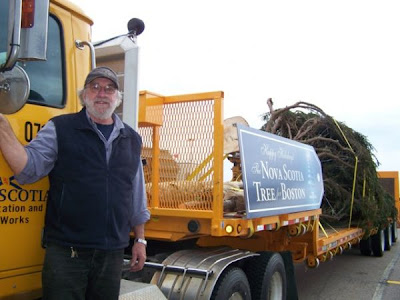 Truck driver Don MacLean posing w/the Boston Tree before it embarks on the ferry at Digby, NS on November 17th. MacLean works for Nova Scotia's Department of Transportation and has driven the Boston Tree each year since 1998. Jonathan Riley/Digby County Courier photo

A 44 foot spruce from the property of Ken and Donna Spinney of Argyle, NS has the honor of being Nova Scotia's annual Christmas tree to the city of Boston this year.


The tree was felled in a ceremony with schoolchildren and local officials present on the morning of November 15. The tradition goes back to the horrific 1917 explosion of a French munitions ship in Halifax Harbor that killed at least 2,000 people. A railway dispatcher named Vince Coleman was able to get word to the outside world of the impending catastrophe and stopping incoming trains short of the blast radius before he was killed in the massive explosion.

When word reached Boston, the Boston chapter of the Red Cross immediately began gathering doctors, nurses, shelters and medicine to put on board a special train from Boston to Halifax to relieve the doctors and rescue workers who had been toiling non-stop since the blast.

As a gesture of their appreciation, the province of Nova Scotia sent the city of Boston a giant Christmas tree the following year. While that apparently seemed like a one-time deal, the Lunenburg County Christmas Tree Producers Association decided to revive the tradition in 1971 as a means of promoting their product, and the city of Boston was more than happy to receive a tall tree for Boston Common.

This year marks the 40th anniversary of the Boston Christmas tree revival. This year's tree travelled by ferry from Digby, NS across the Bay of Funday to New Brunswick and continued via highway from there.

This year's lighting ceremony is scheduled for Thursday, December 1st.
Posted by Fenway_Nation at 11:00 PM