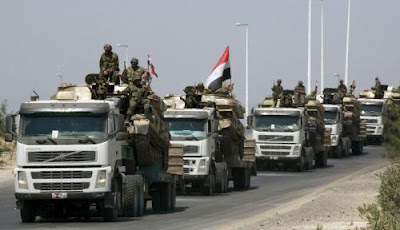 Syrian Military withdrawing from Hama over the summer- AFP Photo

In what has been the most high-profile attack against Basar Al-Assad's regime since widespread antigovernment demonstrations began earlier this year, defectors from the Syrian military attacked a military compound and fired rocket-propelled grenades at the Damascus headquarters of the ruling Ba'ath party this week.

On Wednesday, there were reports of explosions and gunfire in the Damascus suburb of Harasta as the Free Syrian Army claimed to have attacked and heavily damaged an Air Force Intelligence compound. Despite the name, Syria's Air Force Intelligence Directorate deals with matters unrelated to the air force, including harassing, intimidating and torturing political opponents at home and abroad.

Although there were no reported casualties in Wednesday's attack, the group of defectors from Syria's military calling themselves the Free Syrian Army (FSA) claimed they chose the Air Force Intelligence compound against the intelligence arm of Assad's ruling Ba'ath party as a symbolic target.

In the early morning hours of Sunday, rocket propelled grenades slammed into the headquarters of Assad's ruling Ba'ath party in Damascus.

It is thought the attack was carried out just before dawn when the building was mostly empty. There were no immediate reports of casualties.

Thabet Salem, a journalist who lives close the party building, told Al Jazeera: "This is a clear-cut escalation of what's going on ... It will bring us into a dangerous phase."

Besides pressure from the West, Syria faces additional pressure from the 22-nation Arab League as a deadline to either end the military crackdown or allow international monitors into the country passed over the weekend. Syria's membership in the Arab League was suspended earlier this month and Assad's regime may now face additional diplomatic and economic sanctions from once-allied nations in the region.

The Assad regime's ongoing crackdown, however, did not deter them from being accepted by the UN on the UNESCO organization, which oversees issues relating to human rights.
Posted by Fenway_Nation at 4:39 PM