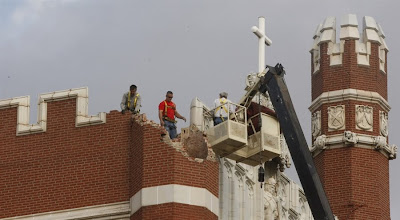 The Sooner state isn't the first place that springs to mind when one think of seismic activity, but a magnitude 5.6 earthquake that was felt as far away as Wisconsin and Tennessee shook the region on Saturday night.

“The picture by the TV fell off the wall, and we jumped up because we thought somebody had hit the house,” Noeh Morales said.

“It was like a roaring noise. I’ve never one that bad over here,” he said.

Morales said he was asleep at his home near SW 69 and Pennsylvania Avenue in Oklahoma City.

“It woke me out of a dead sleep. I felt the whole house shaking. I jumped and ran outside to see what was going on,” he said.

The strongest earthquake previously reported was April 9, 1952, in El Reno, according to the geological survey. Its magnitude was 5.50.

Michelann Ooten, a spokeswoman for the Oklahoma Department of Emergency Management, said no injuries were reported to emergency management officials and she had no reports of major damages.

The Lincoln County sheriff’s office said late Saturday that damage has been reported across the county, but officials still were responding to calls and were not sure of the extent of damage.

The Oklahoma City Fire Department reported no injuries or serious damage as of 11:15 p.m.

The Saturday night tremors were part of a series of fore and aftershocks throughout the day. In addition to reports of scattered damages to various residential structures, the quake also toppled one of the spires of the Benedictine Hall at St Gregory's University in Shawnee (pictured above) and buckled portions of US Highway 62 in Lincoln County.

The epicenter of the quake was reportedly some 70 miles northeast of Oklahoma city in the town of Sparks in Lincoln County. Interestingly, ESPN indavertently caught the quake on camera when correspondent Kirk Herbstreit was doing a postgame show from the Oklahoma State/Kansas State football game in Stillwater, OK.
Posted by Fenway_Nation at 11:27 PM