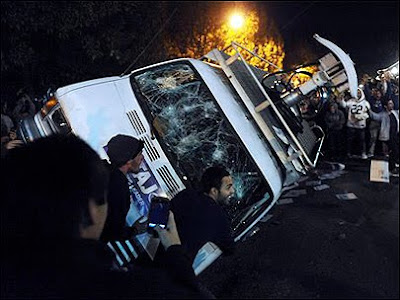 News of Paterno's dismissal was met with rioting from irate Penn State students who overturned vehicles, ripped out light poles and pelted pedestrians and police officers with rocks and bottles in State College, PA Wednesday night.

The 84-year old Paterno was fired after 46 seasons as Penn State's head football coach, with a career record of 409 wins and 136 losses, making him the winningest coach in NCAA Division 1 football history. Assistant coach Tom Bradley is expected to act as interim coach for the remainder of the season.

The Nittany Lions are currently ranked #12 in the country and are expected to host the #19 Nebraska Cornhuskers in Happy Valley on Saturday- Penn State's final home game of the season.

Assistant coach Mike McQueary, who testified to the grand jury that he had seen former offensive coordinator Jerry Sandusky molesting a young boy in the locker room showers in 2002, will reportedly miss Saturday's game due to unspecified threats. McQueary later told Paterno about what he had witnessed and Paterno had told then-athletic director Tom Curley, but no further action was taken.

Curley and former university Vice President Gary Schultz are charged with perjury and failing to report the 2002 incident.

In a twist that seems right out of a Stieg Larssen manuscript, the Centre County, PA District Attorney who investigated 1998 claims that Sandusky was engaged in inappropriate relationships with boys as young as 8 at Penn State facilities has been missing since 2005 and declared legally dead by his family. Although it would be tempting to fall into some conspiratorial mindset thinking that the Penn State scandal just now coming to light played a role in DA Gricar's disturbance, if foul play was behind the disappearance of the Pennsylvania DA, it came just weeks after Gricar was at a press conference announcing Centre County's biggest drug bust.

ELSEWHERE IN NCAA FOOTBALL: There was some more ACC Football tonight. Mercifully, this didn't involve the hapless and outmatched BC Eagles getting stomped.

Under the Georgia Dome in Atlanta, it was the Virgnia Tech Hokies who continued their win streak against the Georgia Tech Yellow Jackets on Thursday night.

Georgia Tech was leading the Hokies 26-21 late in the 3rd period and appeared to have the Hokies as good as stopped on 3rd and 19 when Yellowjackets LB Jeremiah Attaochu took a swing at Hokies QB Logan Thomas for a 15 yard penalty and an automatic first down. Aided by a 44 yard run from RB David Wilson, the Hokies would score on that drive to make it 27-26 Virginia Tech. The Hokies would then get 10 more points in the 4th quarter to put the game away by a 37-36 final.

MISSOURI: The Mizzou Tigers made official their move to the SEC this week during an announcement at the campus student center. Missouri is the second team to leave the Big 12 for the SEC, with both Mizzou and Texas A&M expected to join the SEC at the start of the 2012 season. 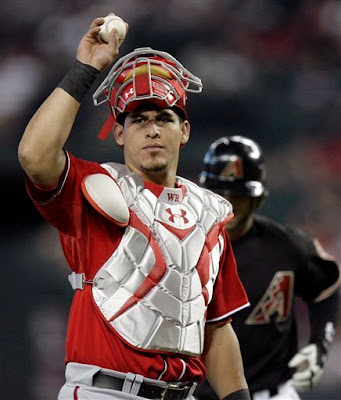 According to a spokeswoman for Ramos' Venezuelan-league team, Ramos was abducted by multiple gunmen in full view of his fathers and brothers inside of his home at Santa Ines at 6:45 Wednesday night.

Reportedly no contact has been made with Ramos' family. In the recent past, family members of MLB players in Venezuela sometimes abducted for ransom, but this is reportedly the first time an active player has been abducted.

Ramos was acquired from the Minnesota Twins in a 2010 trade that sent All Star relief pitcher Matt Capps to the twin cities. This season, Ramos batted .267 with 15 home runs and 52 RBI while throwing out 28% of the runners who attempted to steal on him.

Kidnappings targeting wealthy and middle-class Venezuelans have been on the increase for more than a decade.

The wealthy have taken steps to protect themselves. Sales of armored cars have soared in the past several years. Bodyguards typically shadow major leaguers when they return to their homeland to play in the winter league.

It is not known what, if any, security precautions Ramos took while returning to Venezuela.

[Personally, I think Ramos' abduction is the logical outcome of more than a decade of socialist dictator Hugo Chavez's economic policies centered around avarice and class envy- NANESB!]

ELSEWHERE IN MLB: Wow- I might've actually called this at the end of October.

Other potential candidates include former Cub Ryne Sandberg and Cardinals 3rd base coach Jose Oquendo. Among the anticipated candidates, Francona is the most experienced.

RED SOX: Speaking of interviews, the Red Sox are continuing their offseason interviews to replace Francona.

Texas Rangers pitching coach Mike Maddux had announced that he was withdrawing his name for consideration for Boston's managerial vacancy. 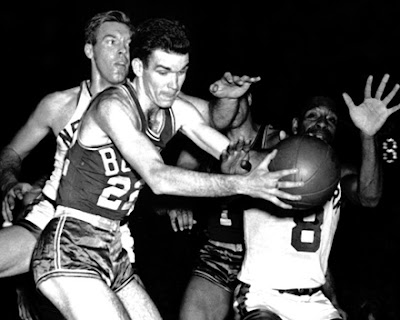 NBA: Former Celtic and basketball hall of famer Ed Macauley passed away at the age of 83 in St Louis on Tuesday.

The lanky Macauley, also known as 'Easy Ed' played for a season with the St Louis Bombers of the Basketball Association of America before the Franchise went under and the Boston Celtics selected him in a 1950 dispersal draft.

Between the 1950-51 season and 1955-56 season, Macauley played for Red Auerbach's Celtics before being traded to the St Louis Hawks for Bill Russel. A few years after the deal, Russel and the Celtics faced off against Macauley and the Hawks in consecutive NBA Championships in 1957 and 1958. The Celtics won the title in '57 and the Hawks beat Boston in '58.

Macauley would go on to coach to Hawks for two seasons, taking them to the playoffs, but not making it to the NBA finals. In 1960, 'Easy Ed' was named to the basketball hall of fame at age 32- to this day, the youngest player to be admitted to the Naismith Hall. Interestingly, after moving back to the St. Louis area Macauley became an ordained deacon in the Catholic church in 1989.

The Celtics have retired Macauley's number 22.

NHL: After their forgettable October, the Bruins are now back to .500. 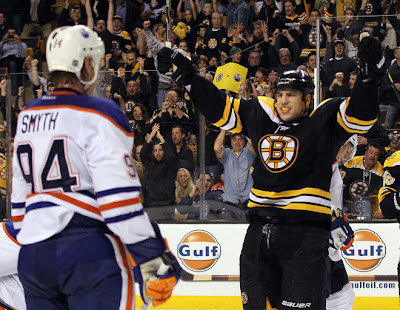 Of course, it helps when you start piling up the wins against teams in your own division, but the Bruins homestand continued on Thursday night when they played host to the Edmonton Oilers (9-3-2).

The Bruins got out to a pretty quick 2-0 lead in the first before the Oilers knotted things up to send both teams to the locker room tied at 2-2. Early in the 2nd, the B's would get the lead back on a power play goal from Brad Marchand followed by a Tyler Seguin tally less than 3 minutes later to make it a 4-2 lead.

Heading into the 3rd period, neither team was able to find the back of the net until less than 5 minutes to go in regulation when Ryan Smyth was able to convert an Oilers power play with 7 seconds to go on the man advantage to make it a one-goal game. However, Milan Lucic and Brad Marchand would score 30 seconds apart to pad the Bruins lead and give them the 6-3 win, making them a .500 team at 7-7-0.

Tukka Rask turned aside 27 of 30 shots for his second win while Devan Dubnyk allowed 6 of the 28 shots he faced by him. The Bruins went 2 for 5 on their power play opportunities on Thursday night.

Interestingly, Thursday night's game featured the top two picks of the 2010 NHL Entry Draft (the Bruins were using Tornto's pick that they obtained in the Kessel trade)- Boston's Tyler Seguin and the Oiler's Taylor Hall. Seguin had a goal and an assist while Hall had an assist. 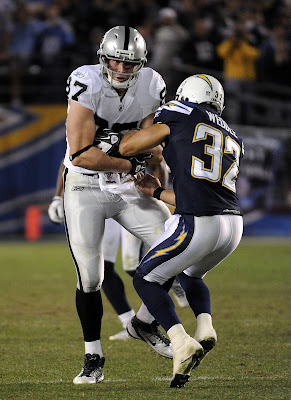 NFL: Are you ready for some football? Some Thursday night football?

Don't sweat it- neither were the San Diego Chargers. Recently acquired from the Cincinnati Bengals, Raiders QB Carson Palmer went 14-20 with 299 yards, 2 TDs and an interception.

To be honest, I tuned in just in time to catch River's pass to Jacob Hester to make it a 24-17 game with the Raiders on top. And that was it- no more scoring. None.

With the win, the Raiders take posession of 1st place in the AFC West.

Next week's Thursday night game will feature the Jets and the Broncos.
Posted by Fenway_Nation at 10:56 PM