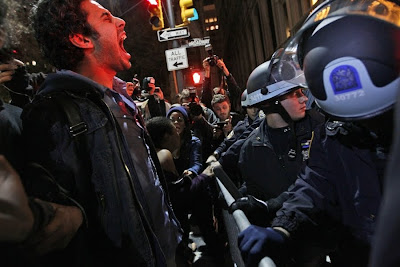 At least 70 protesters from the 'Occupy Wall Street protests were arrested by NYPD officers in the early morning hours of Tuesday as they moved to clear the park of squatters.

At around 1 AM, officers began circulating bulletins from Brookfield Property Management- owners of Zucotti Park- asking that those camped out on the property begin gathering up their personal items and leave.

Mayor Bloomberg, NYPD Commissioner Kelly and Brookfield property management [NYSE: BPO] decided that after weeks of unsanitary conditions, assaults, noise complaints and rapes that the park should be cleared of the demonstrators. As soon as the police removed the last of the holdouts (some of whom had chained themselves to trees) New York City sanitation workers began moving through the park cleaning up tents, garbage and other belongings left behind.

The Occupy Wall Street demonstrators vowed to return and shut down lower Manhattan with acts of civil disobedience on the 2-month anniversary of the '#Occupy' movement. One Zucotti park occupier was arrested after his videotaped rant promising arson attacks against Macy's and other New York businesses went viral.

Although a court ruling issued later on Tuesday would allow the Occupy Wall Street protesters to return to Zucotti park, the ruling stipulated that would not be allowed to bring sleeping bags or tents back into the park.

Over the weekend, police in Portland, OR acting on orders from mayor Sam Adams, dismantled two campsites for #OccupyPortland in Chapman and Lownsdale Squares, resulting in one officer injured by a projectile and one protester arrested. By ( AM on Sunday Morning, both parks had been cleared of the occupiers and tents.

In Dallas, local TV stations are reporting that The City Hall Park encampment which #OccupyDallas set up was cleared of demonstrators with little incident, as many of the 'occupiers' had left in advance of the Dallas police moving in.

Over in the nation's Capital, an Idaho man suspected of firing at the White House reportedly spent time with #OccupyDC protesters. After the White House was peppered with rounds from an AK-style rifle (President Obama was en route to Hawaii for an economic summit), the rifle was found in an abandoned car shortly afterwards.

Meanwhile in Oakland, CA- which had seen some of the fiercest clashes between demonstrators and police, it appears that aides to Mayor Jean Quan were using a neo-nazi as an intermediary to communicate with #OccupyOakland. Two of Mayor Quan's top aides have resigned since clashes between #OccupyOakland protesters and Oakland police.