Greece's ruling Socialist government was reeling and on the verge of collapse as several lawmakers and ministers called for a referendum over the bailout package that Prime Minister George Papandreou had managed to secure from the European Union.

Several ministers and lawmakers called for an emergency meeting of the governing Socialists in parliament, where Papandreou has convened a cabinet session for noon.

His shock referendum decision Monday angered European leaders and many of his own party lawmakers, several of whom have called for the prime minister to step down and a cross-party national unity government to be created in order to safeguard the bailout.

Speculation that the referendum pledge may be abandoned alongside a caretaker government has helped calm frayed nerves in the markets. Athens main stock market outperformed its peers, rising by over 3 percent by midday trading.

Though the leaders of the world's economic powerhouses were gathered at the chic French resort of Cannes for the Group of 20 meeting, most attention in the financial markets was focused on Athens and the mounting political crisis, which erupted earlier Thursday when Finance Minister Evangelos Venizelos broke ranks with Papandreou on the referendum proposal.

Papandreou's referendum proposal horrified Greece's international partners and creditors, triggering turmoil in financial markets as investors fretted over the prospect of a disorderly debt default and the country's exit from the eurozone.

In perhaps an even more disturbing development out of Athens, Greek defense minister Panos Beglitis announced the summary dismissal of the heads of the Greek Army, Air Force and Navy on Thursday. Beglitis is an ally and confidant of PM Papandreou. 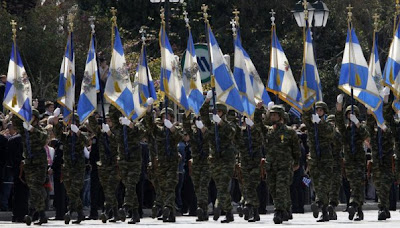 Neither the minister nor any government spokesman offered an explanation for the sudden, sweeping changes, which were scheduled to be considered on November 7 as part of a regular annual review of military leadership retirements and promotions. Usually the annual changes do not affect the entire leadership.

“Under no circumstances will these changes be accepted, at a time when the government is collapsing and has not even secured a vote of confidence,” said an official announcement by the opposition conservative New Democracy party.

“It has no moral or real authority any more, and such surprise moves can only worsen the crisis currently sweeping the country”.

The party said it will not accept the new nominations and will take its own decisions on armed forces changes if it comes to power at the general elections that are expected to take place in Greece if the government loses the vote of confidence on Friday night.

The left wing SYRIZA party said that the government’s decision “gives the impression that it wants to create a highly politicized armed forces that it can control at a time of political crisis”. It called on the President of the Republic not to proceed with the formal ratification of the defence minister’s decree and to wait until new general elections take place.

Similar statements were made by all smaller political parties from the extreme right to the hard-line communists.

From the late 1960s the the mid 1970s, Greece was ruled by a military junta, although many experts feel that this week's moves were what could be a final opportunity for Papandreou to fill the military's top slots with candidates of his choosing, as his government could be looking at a no-confidence vote in Parliment on Friday.

While some think that either a coup or declaration of martial law would be farfetched, between the clashes between the government and protesters, the ongoing economic crisis and the top brass being dismissed, the table seems obligingly set for some of the more unpleasant scenarios.
Posted by Fenway_Nation at 4:04 AM