Rivalry Sports Chowdah Update- The OTHER Jets Visit Boston For 1st Time in 16 Years; Eagles Lay an Egg Vs Pats 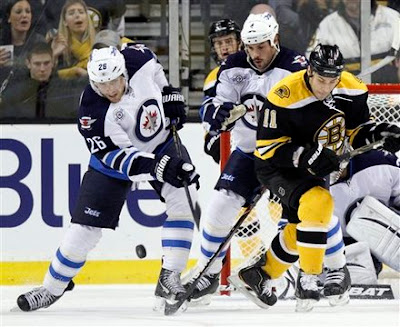 NHL: Almost 16 years to the day that they last played each other in the old Boston Garden, the Winnipeg Jets came into Boston on Saturday evening.


The Jets got out to a fairly quick 2-0 lead about halfway through the 1st period, with goals from Evander Kane and Dustin Byfuglien less than 40 seconds apart. With about 3 and a half minutes to go in the first, Zdeno Chara got the Bruins on the board with a power play goal and Boston entered the 1st intermission trailing 2-1.

The Bruins would then go on to tie the contest up at 2-2 thanks to a shorthanded goal from Chris Kelly at the 7:28 mark, then take the lead on another Kelly tally at the 16:26 mark- this one was even-handed.

With the Jets still trailing with less than 2 minutes to go in the 3rd, the decision was made to pull goalie Ondrej Pavelec for the extra attacker, but Brad Marchand made them pay for that decision by getting an empty-netter almost as soon as Pavelec hit the bench to make it a 4-2 Bruins win.

Winnipeg's Onrej Pavelec stopped 32 of 35 shots faced (the empty-netter doesn't count) while Tim Thomas stopped 40 of 42 shots that the Jets put on goal Saturday night. C Chris Kelly came into the Saturday night game with 7 goals on the season and now has 9. Boston went 1 for 5 on the power play while Winnipeg went 0 for 4, including giving up a shorthanded goal to Chris Kelly.

Unlike 1996, the Bruins will see the Jets more than once this season. Since Winnipeg is still technically in the Eastern conference, they face each other at least 3 other times this season, with the next matchup coming on the road at Winnipeg's MTS Centre in about a week.

In the meantime, the B's have a home-and-away series with the Maple Leafs coming up beginning on Wednesday in the Garden and continuing Saturday night on the road in Toronto.

OTHER NHL NEWS: The Carolina Hurricanes have fired head coach Paul Maurice and are expected to replace him with former All-Star Kirk Muller. The announcement was made on Monday after Carolina had lost 10 of its last 13 games in the last month. 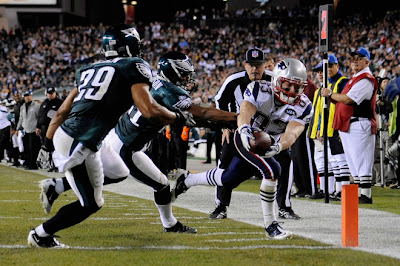 NFL: Even with starter Micheal Vick out with fractured ribs, the Eagles were able to get out to a quick 10-0 lead against New England on Sunday. However, New England would come back to get on the board thanks to a sustained drive where Ben Jarvus Green-Ellis punched it in from the Eagles 4 yard line to close the first quarter trailing 10-7.

From the 2nd quarter on, it was basically all New England. The Pats first possession of the 2nd quarter was highlighted by a 63 yard quick strike between Brady and WR Deion Branch, where Branch was brought down at the Eagles 1 yard line only to have the law offices of Ben Jarvus Green-Ellis once again punch it in for New England to take the 14-10 lead.

From there on out, the Pats basically ran away with it, with the Eagles giving up a 41 yard pass and running play to WR Wes Welker and getting a Gostkowski FG for their last possession of the 1st half to send them to the locker rooms at halfine with New England up 24-13.

In the second half, the Eagles faithful began making themselves scarce as Brady and Welker connected for another TD while Wide Reciever-turned-defensive-back Julian Edelman made a key tackle on Eagles QB Vince Young to keep him outside of the end zone. Tom Brady went 24-34 with 361 yards and 3 TDs and rushing for 28 yards (his highest total since 2006) while Vince Young went 26-48 with 400 yards, a TD and an interception. Green-Ellis would have 44 yards and 2 TDs on 14 carries on the day.

The Patriots win this one pretty handily by a 38-20 final (and it wasn't even that close), setting up a Sunday afternoon showdown with the winless Indianapolis Colts next week.

OTHER NFL NEWS: Detroit Lions Defensive Tackle Ndamukong Suh was ejected from Thursday afternoon's Thanksgiving game between the Packers and Lions after stomping on Packers Center Evan Dietrich Smith long after the play was blown dead. Suh initially refused to apologize, until the Lions released a statement the following day calling his conduct 'unacceptable'. Green Bay would go on to win by a 27-15 final on Thanksgiving.

On Monday, Suh reportedly requested a meeting with NFL Comissioner Roger Goddell. A fine and suspension are expected to be handed down by the League this week.

NCAA FOOTBALL: The Rutgers Scarlet Knights headed into Saturday's game against the UConn Huskies hoping for a share of the Big East and hoping for an invitation to a BCS Bowl game.

The Huskies, however, had other plans. Getting out to the early 14-0 lead, the Huskies never really let up, taking a 24-10 halftime lead and going on to win by a 40-22 final over Rutgers. The win keeps 5-6 UConn's bowl hopes alive heading into the regular season finale against the Cincinnati Bearcats on Saturday at noon eastern time. Should the Huskies go on to win, they will be the only bowl-eligible school from New England this year.

COLONIAL ATHLETIC ASSOCIATION: Two New England schools from the Colonial Conference now find themselves in the FCS playoffs this month. On Saturday, the 8-3 Maine Black Bears will take on the Appalachian State Mountaineers while the UNH Wildcats will take on the Montana State Bobcats in Bozeman, MT.

ELSEWHERE IN THE CAA: UMass wrapped up what is likely their final home game in Amherst, Ma for the foreseeable future with an unceremonious loss to James Madison by a 34-17 final last weekend. Two days after the regular season finale, UMass atheltic director John McCutcheon fired head football coach Kevin Morris. The dismissal comes as UMass finished their final season in the Colonial conference with a 5-6 record.

The Minutemen are slated to appear in games against UConn, Michigan, Indiana and Venderbilt as well as conference opponents from the Mid America conference (no word on if any matches with Temple are in the mix) for the 2012 season.

OTHER NCAA FOOTBALL NEWS: The Ohio State Buckeyes announced the hiring of former Florida head coach Urban Meyer on Monday afternoon. The announcement comes just days after the 6-6 Buckeyes 34-40 loss to #17 Michigan to wrap up their regular season- one of the few 'rivalry' games from Saturday that was actually close.

Braun had a batting average of .332 with 33 homers and 111 RBI's during the 2011 season. The Brewers also won the NL Central pennant while the Dodgers missed the postseason altogether, a factor that Braun himself felt influenced the outcome of the MVP voting.
Posted by Fenway_Nation at 9:25 PM