Today's Train of Thought- Garden Spot in the Garden State 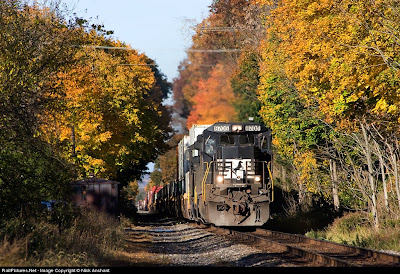 Today's Train of Thought takes us to New Jersey, although thankfully it's quite a ways removed from the filming venue for The Jersey Shore.

Although many people from the NYC/tri-state area have been known to flock to northern New England or upstate New York during autumn to take in the fall colors, some might be surprised to learn that New Jersey has its share of foliage. Back in the late 1980s and through most of the 1990s, the New York, Susquehanna & Western would run excursion trains through its lines in Northwestern New Jersey via Sparta Jct. Today, the NYS&W Technical & Historical Society operated excursions year-round over the Belvedere & Delaware River railroad in the western corner of the Garden State.

Of course, the business of hauling freight doesn't stop just because the leaves are changing color [altho' enough leaves accumulating on the rails can lead to slippery rails- NANESB!] and eastern New Jersey is home to some very busy yards and intermodal facilities.