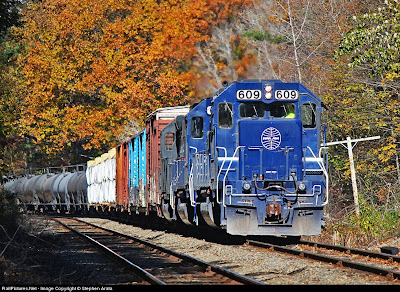 Today's train of thought takes us to the Southeastern corner of the Granite State on the former Boston & Maine line between Billerica, MA and Rigby Yard in Portland, ME. While not part of the Norfolk Southern/Pan Am Patriot Corridor, the line has seen a marked increase in traffic over the last decade. While aggregates from Ossippe, NH bound for Boston's Big Dig as well as improved connections with CSX, Canadian Pacific and Norfolk Southern with Pan Am west of Ayer, MA no doubt accommodated an increase in freight traffic between Maine and the rest of the nation, the most high profile trains using this stretch of the Pan Am are the 5-daily Amtrak Downeaster trains departing out of Boston's North Station.

The 116-mile trip between Boston and Portland, ME consistently enjoys the highest ridership rates on the Amtrak system and is expected to undergo a 30 mile expansion east to Brunswick, ME in the near future.

With all that said, it is still freight that pays the freight on the former B&M Eastern Line. Pan-Am and Amtrak have begrudgingly learned to coexist over the last 10 years, and both railroads are better off for it.

Here, railpictures.net contributor Stephen Arata caught Pan Am symbol freight WAAY [WAterville, ME to AYer, MA] slowing down as it rounds a curve in Newfields, NH under a canopy of New England fall color on November 5, 2011. SD40-2 #609 and two other Pan-Am units are grinding to a halt as the freight train awaits the passage of one of the Downeaster Amtrak trains.
Posted by Fenway_Nation at 11:35 PM