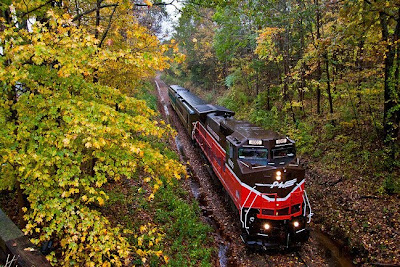 NEW ENGLAND: Some of you might recall back in late August that officials from Guilford/Pan-Am and Norfolk Southern [NYSE: NSC] observed progress on the Patriot Corridor project and using a joint office car special, inspected intermodal facilities in Ayer, MA and one under construction in Mechanicsville, NY before Hurricane Irene struck.

A second, separate office car special for officials from the Canadian Pacific [NYSE: CP], the Vermont Railway, Rail America's [NYSE: RA] New England Central and the Providence & Worcester [NASDAQ: PWX] was supposed to take place on the Green Mountain Gateway in late August as well, but was postponed indefinitely because of extensive flood damage both the Vermont Railway and New England Central sustained due to Tropical Storm Irene.

Powered by a General Electric locomotive from Providence & Worcester and with two passenger cars from the Vermont Railway in tow, the OCS got underway departing east out of Whitehall, NY and continuing on towards Bellows Falls, VT on October 19th over the recently-reopened Green Mountain Railway line which was pummeled in the wake of Tropical Storm Irene. From there, it continued south over the New England Central to Willamantic, CT via Palmer, MA. At Willamantic, the train continued east over Providence & Worcester's Willamantic Branch to Plainfield, CT.

Reopened in 2007, the Willamantic branch was plagued by a series of derailments in 2010 and the FRA ruled that the line would be downgraded to 'excepted', limiting speeds on the line to 10 MPH and preventing more than 5 cars of hazardous materiel from travelling the line. At Plainfield, CT, the Willamantic Branch intersects with the P&Ws Worcester, MA to Groton, CT line and from these, the OCS headed back north into Massachusetts. Since the derailments, many of the unit ethanol trains that traverse the Green Mountain Corridor simply travel all the way south to the NECR/P&W interchange at New London, CT before continuing on to Providence via Worcester, MA.

Besides unit ethanol trains, the railroads that make up the Green Mountain Gateway hope to compete against Norfolk Southern/Pan-Am's 'Patriot Corridor' and CSX's Boston line for autorack and intermodal traffic. In 2006, the Green Mountain Gateway saw unit trains of imported coal from South Africa being offloaded in Providence, RI with a final destination of Johnson City, NY- just west of Binghamton, NY- via Canadian Pacific's former Delaware & Hudson Bridge Line for a few weeks as the power plant there was test burning various grades of coal. While there is no more unit trains of imported coal for Johnson City, the P&W does still handle unit trains of imported coal to First Light's Mt. Tom, MA power plant and Northeast Utilities [NYSE: NU] Bow, NH plant. 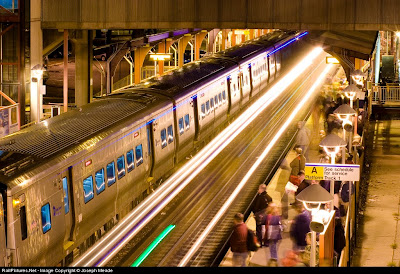 NEW YORK: Hundreds of Long Island Railroad Employees may have scammed New York City's MTA and the US Railroad Retirement Board out of more than $1 billion in a pension and disability fraud scheme dating back to at least the late 1990s. Eleven people, including two doctors and the former President of United Transportation Union Local 645, have been charged with the decade-long scam bilking the pension of the nation's largest commuter railroad.


Janice Fedarcyk, the head of New York’s FBI office, called it a “game where every retiree was a winner.” U.S. Attorney Preet Bharara said the disability pension program was not designed to be “a feeding trough for the truly dishonest,” but authorities say that’s what happened.

Hundreds of LIRR employees falsely declared themselves disabled to collect more pension money from the ages of 50 to 65, when they would otherwise qualify for full benefits, according to a criminal complaint filed in U.S. District Court in Manhattan.

The complaint said a retired engineering manager who complained of severe hand, knee, shoulder and back pain often played tennis and golf while collecting about $105,000 yearly in combined pension and disability payments.

Another former employee said she suffered neck, shoulder and hand pain from computer work and couldn’t stand more than five minutes without leg pain. She was “surveilled shoveling heavy snow for approximately one and a half hours,” the complaint said. She gets about $108,000 a year in combined pension and disability payments.

The complaint said many workers who retired with disability benefits worked unusually high amounts of overtime in the five years before retirement because pensions are calculated based on earnings during that period. The heavy workloads often continued “right up until the very day when they and their physicians claimed they were utterly unable to continue doing their railroad jobs,” the complaint said.

The complaint also seemed to place some of the blame for the scandal on the pension system itself, saying the “exceptionally high rate of occupational disability applications for the LIRR can be attributed to the fact that the LIRR, and the LIRR alone, offers a pension to employees as young as 50 years old.” The complaint said unscrupulous employees lie about their physical condition so they can retire at an earlier age with a salary almost equal to what they got when they were working.

Three doctors, one of whom has since died, were responsible for 86 percent of the railroad’s disability applications before 2008. One doctor recommended at least 839 LIRR employees for disability from 1998 to 2008, the complaint said.

Authorities said the doctors collected $800 to $1,200 in fees from each patient as they built disability cases by prescribing unnecessary medical tests and physical therapy. They said the doctors then fabricated or grossly exaggerated medical assessments and built illness narratives to show the employees were unable to work.

The charges stem from a September 2008 investigative report in the New York Times which pointed out that nearly 90% disability attriton rate of the LIRR personnel. The claims were not just limited to engineers, conductors or track workers, either- the former deputy general counsel and claims manager were seeking disability according to the New York Times report.

The MTA claimed that it had no say-so in awarding the fraudulent disability payments and that the RRB was acting as a rubber stamp for any claim that came before it. The FBI and RRB's Inspector General have filed charges against the 11 participants in the scheme where they feel they have the strongest evidence. Since its creation in the 1930s, the RRB is the government agency that administers disability, unemployment, retirement and survivor benefits to railroad workers and their families. 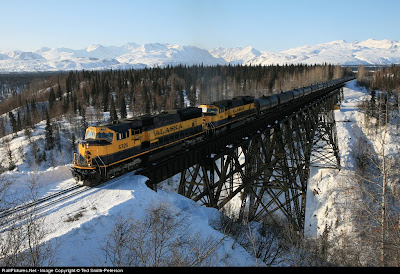 ALASKA: The Alaska Railroad broke ground on their 80 mile Delta Jct Extension at the end September by beginning construction of a bridge spanning the Tanana River in Salcha, AK.

The first phase of the project includes the construction of a 3300 ft bridge and 11,000 foot levy. The construction is expected to cause intermittent delays and congestion for the next two years (no work will be done in the dead of winter) but project managers are hoping some 75 truckloads of firewood donated to area residents will offset any inconvenience. The new extension will give the Alaska Railroad access to the US Army's Fort Wainwright as well as potential shippers in the agricultural, mining and petrochemical sectors. 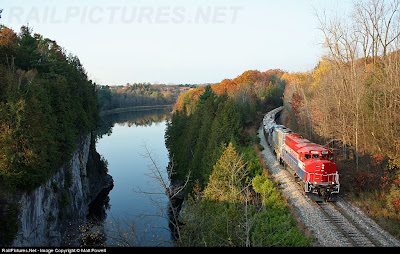 VERMONT: While the railroads throughout the Green Mountain state have reopened in the wake of Tropical Storm Irene, the same can't be said for the state's road network. Hit particularly hard was Vermont Route 107 to the west of Bethel. Surging floodwaters from the nearby White River have obliterated sections of the road.

The state of Vermont is hoping to have the highway up and running by mid-December, and to that end they're enlisting the aid of the Vermont Railway and New England Central to do some of the heavy lifting.


The rocks are loaded onto the side-dump gondola cars on the Vermont Railway outside of Burlington and then handed off to the New England Central, where they turn south at Essex Jct and continue about another 50 miles over the newly reopened former Central Vermont mainline to Bethel, where they're dumped down an embankment for trucks to haul the rest of the way to the construction site. 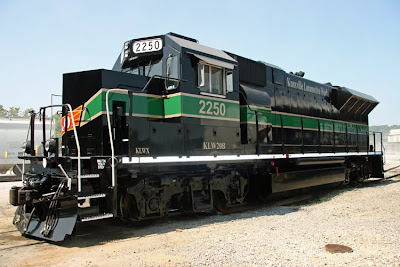 TENNESSEE: Gulf and Ohio has officially entered the low-emissions diesel market with the unveiling of their KLW20B prototype in October. The Knoxville Locomotive Works website claims a fuel savings of up to 30%, lower rate of oil consumption and compatibility with already-existing components from EMD (the locomotive was made from the frame and carbody of a Norfolk Southern GP38).

Reportedly, the locomotive underwent testing on Gulf and Ohio's Knoxville and Holston River, which is also home to the G&O's 1890 built 2-8-0, Southern #154 that had been fully restored in 2010. 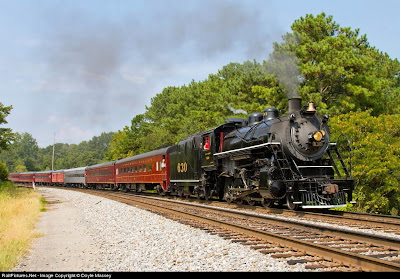 The Labor Day excursions over the Norfolk Southern also coincided with the TVRM's 50th anniversary, which featured a number of static displays and some diesel excursions [as well as the largest Moon Pie; no foolin'- NANESB!]. Although Tropical Storm Lee put a damper on some of the celebrations, the TVRM's Labor Day railfest was well attended and the #630 is expected to power another mainline excursion over the Norfolk Southern- this time to Knoxville, TN on November 14th.
Posted by Fenway_Nation at 10:49 AM